To lose one parent, Mr. Worthing, may be regarded as a misfortune; to lose both looks like carelessness. _ Oscar Wilde, The Importance of Being Earnest

Some thoughts on Uber, some blindingly obvious. I’ll say at the outset that I think Uber is a 10x improvement on existing cabs, and I have no problem in principle with a supply/demand based surge pricing model. But here goes…

1) Uber doesn’t have it together operationally. 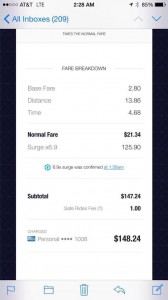 Exhibit 3: Combining 1 and 2 into a singularity of Uber-fail, some drivers said that even as the map showed a huge pricing surge presumably due to overwhelming demand, they couldn’t get passengers. Apparently the surge drove passengers away…or in any event something was awry. 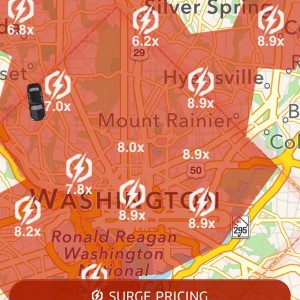 If you’re managing to piss off the riders because they’re feeling gouged, and drivers who feel they’re being taken advantage of, well, that seems less like misfortune and griping, and more like carelessness in running the system.

2) The frequent surges seem rather extreme. Hotels might have a 10x change in price from bottom of low season to the peak convention season. But…hotel room supply is perfectly inelastic in the short run. Uber, in most cities, should be able to tap casual drivers and get many more cars on the road at peak times. Car rides should be closer to other seasonal products and services like airfares, where maybe you see a 3x differential on a peak date.

Maybe, over time they’ll have more data and get better at forecasting demand on the one hand. And drivers and passengers will understand the system better and not get shocked and outraged. But…

3) There is very limited transparency, and data for riders and drivers to plan ahead. A fundamental problem with Uber’s surge pricing model is that it is a black box, and seems self-serving to Uber.

Even Uber’s exceptional pre-NYE blog was of limited value in providing actionable data about how high the surge was expected to go, beyond don’t travel between 12 and 2. (And they didn’t even provide lip service as to how they were working to get as many drivers as possible on the road to limit the surge, which is tone-deaf).

When they surge and then drivers sit around doing nothing, either the algorithm is crap, or they are raising prices on a hair-trigger whenever they think they can to maximize revenue, which clearly would be in their financial interest.

Consider one extreme _ the algorithm always adjusts price as much as necessary to keep a 1-minute wait. Or the other extreme _ no adjustment _ and wait times go up. Well, some passengers might prefer a brief queue. But clearly, maximizing revenue is to Uber’s advantage.

Say your time is worth $30 an hour. Presumably you would be indifferent between a price with $15 dispersion and a wait time with 30 minutes dispersion. In fact the wait time might be easier to plan for, if it looks busy you call for the car 15 minutes before your dinner is over, maybe you have to rush out a little earlier, maybe you linger a little later. You’ll be happier with that than the current price dispersion with up to 9x surges on New Year’s Eve.

4) Uber wants to maximize profitability, but both drivers and riders value predictability. (see Steve Randy Waldman’s excellent discussion). Economists sometimes (not always) have a blind spot in only considering efficiency in terms of price and quantity. But of course, behaviorally, whenever something unexpected happens, it leads to unhappiness and inefficiency beyond the purely financial cost. Loss-aversion kicks in, and you feel gouged when you expected to pay $10 and had to pay $50 through no fault of your own. Maybe you don’t take a $20 round trip that would otherwise make sense, because you’re not sure if it will turn out to cost $50 to get back.

So I think that 1) Uber’s execution, even though outstanding in many respects, has room to improve, and 2) their market design is not ideal from a consumer standpoint.

5) Without further ado, here are some things Uber could do to improve:

← A Piketty counterargument: Is r > g a reasonable assumption? The Dark Web Stack, Or How To Eff Up The Net →