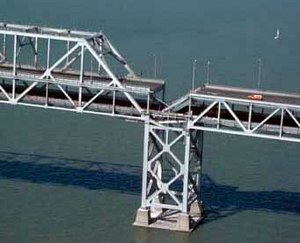 So, some people are talking about Hurricane Sandy putting people back to work, and others are pointing out that this is the ‘broken windows fallacy.’ True, a massive superstorm is usually not a good thing. Nevertheless, three quick points. 1) The recovery spending is not a deadweight loss. You jump into the pool and forget to take your telephone out of your pocket. Rats! this is not a good thing, it’s going to cost to replace it. But then you say to yourself, well, I was due for a new one anyway. The loss is the remaining useful value, not the amount you have to spend on the new phone. An earthquake damages the Bay Bridge, and $6B is spent on a new bridge. But the existing bridge was obsolete and prone to collapse, and the new one is better. The loss is not the $6B cost of the new bridge, just the remaining value of the old one, which may not have been worth much at all. The impact may just be to bring forward necessary spending a little earlier.

2) The recovery spending is not all lost opportunity cost. Suppose you’re a farmer harvesting the crops, and your truck breaks down, and you have to fix it, while the crops rot in the field. That’s a bad break. Now, suppose you’re unemployed and watching TV, feeling sorry for yourself, and your car breaks down. You spend some time fixing it, feel a lot better for yourself, and decide to get a job as a mechanic. That’s not such a bad break. When there’s high unemployment and low interest rates, the situation is more like the latter. Borrowing is not going to raise interest rates and crowd out other useful investment, and hiring recovery workers is not going to have to bid up wages to get them from productive work in other industries. To some extent, we’re just taking idle resources and putting them to work. And an unemployed worker is a wasting asset, you’re never getting back his or her productive years, and the longer they stay unemployed, the more rusty their skills get, the more potential employers question their value, and the less likely they are to return to a similar job. In the sense of forcing people to spend cash on something productive, Sandy is doing what Ben Bernanke is trying to do.

3) The world is a complicated dynamic system. You never know the outcome of the alternative history that could have been. Only simple models give clear answers, and the world does not oblige by acting like one. The hurricane could be pulling a finger out of a dike, Wall Street will feel obliged to move some people away, the tax base will diminish, and New York will go back to the 70s or turn into Detroit. (Unlikely, we survived 9/11, but eventually all shining cities enter a cycle of decay.) Alternatively, the infrastructure could get fixed up, and it could result in surviving an even more massive disaster unscathed that otherwise would have destroyed us.

A natural disaster is not something to be wished for, but we’ve been through worse, it could have come at a worse time, and what doesn’t kill us makes us stronger.

← The Paul Ryan plan Social capital, or the lost art of not taking a dump in the community pool →