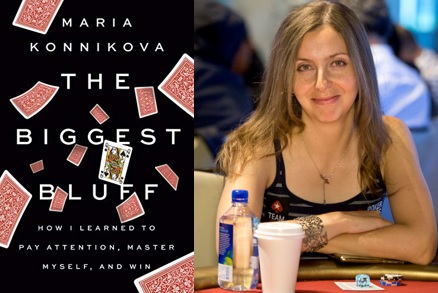 I loved The Biggest Bluff: How I Learned to Pay Attention, Master Myself, and Win, by Maria Konnikova.

Like Maria Konnikova, I think poker is a great laboratory for decision-making under uncertainty. Personal story: I had a job as a market analyst, but I was a terrible trader. One issue I had is I couldn’t pull the trigger. For example, in 2002 after Apple introduced the iPod and the stock market was crashing I wrote something about how with their brand they could own this consumer media space. I had it on a list to buy as the market was crashing but the volatility spooked me. Then when the market stabilized the stock was up 50% and I was like, naw, too much. This was at a price of about $12 at the time but split-adjusted about $1, so about 400x ago.

I was a casual poker player, would play a few times a year for pennies with friends, it was more of an excuse to shoot the shit, not a serious game. Then the big poker boom came along and I thought I should try to beat these small games. Started playing $5 tourneys on PartyPoker and built a bankroll of a couple of thousand dollars, enough to buy some Apple devices and enter a couple of WSOP satellites, which I failed to cash.

It made me a much better investor because I no longer had a problem pulling the trigger. If I had an idea, I was able to get comfortable with a quick upside/downside +EV calculation and bet a small enough 1/n part of my bankroll that intuitively I knew if I did that n times, on average I would do well and never go bust. I internalized Kelly and what loss I was willing to take and the discipline to take and cut the loss. Poker developed confidence. Now, getting a good investment idea is still rare but I’ve had a few and have done OK overall.

So anyway, I like poker, am casually serious about understanding the game, I have a bookshelf with about 3 feet of poker books, and have blogged about the lessons poker teaches about investing.

The Biggest Bluff fits in with Positively 4th Street, The Noble Hustle, The Professor, The Banker and the Suicide King, The Biggest Game In Town, as a very readable memoir of a poker journey.

It stands apart because Maria really took it seriously, she is a scientist and invested 100% effort to learn the game. She enlists all-time great Erik Seidel (made famous by the WSOP highlight in Rounders, with Matt Damon) to coach her on her journey. She talks to many great players, poker psychologists, uses training/simulation software and really goes all out to win. And she wins a live tournament for an $80,000 payout.

She puts me to shame because she read (really?) Von Neumann and Morgenstern’s Theory of Games, which is a fairly impenetrable tome. It would literally take me a year. It’s like reading the Feynman lectures on physics to master hacky-sack. All I ever did was take a Coursera on game theory (recommended), work through my own hand-written sims in Java, and work through most of Chen’s Mathematics of Poker. In my defense when I got into poker some of the modern tools were not available, Pio Solver, PokerTracker, FlopZilla, SnapShove.

The book succeeds as, what you have to sacrifice to become good at something. She’s very honest. It’s a tough game, the struggle is real, and you feel it. There’s a huge element of mastering yourself. I personally do this by not playing stakes above $1/2 level, or tournaments for much over $100. In other words, being a coward. She really challenged herself to play some of the biggest, toughest tournaments. I’m in it mostly for the cheap thrills, the social element, the mental and self-mastery challenge, and proving I can be good at something.

Why did she do it, really? Was it worth it? I have questions.

I have a great deal of sympathy for Maria’s grandmother, who is dismayed that, as a made woman of the intelligentsia, Columbia PhD, multiple books and New Yorker bylines, she would stoop to become a gambler. Like Baba Anya, I think poker is a fun but somewhat pointless exercise. Like Shaw said about chess, a foolish expedient for making idle people think they are doing something clever when they are only wasting their time.

After all that studying, why does she bet 2x the big blind in early position with AA?

And did Von Neumann, the guy who invented game theory, really think he could beat roulette? Unlikely.

In her early ‘failure’, doesn’t she get all in with the best of it and lose to a flush suck-out? And in her big success, doesn’t she benefit from a miracle suck-out? As a player, I wish she would walk through the math and give examples of breakthroughs that made her play better. It’s not a book for a hard-core poker audience. And even though avoiding the skill/luck fallacy is a theme of the book, I think that in order to make the book into a readable narrative, she still falls victim to it.

When I occasionally read about some poker player of the year in Card Player magazine, I’m reminded a little of tongue-in-cheek marble racing videos, a thing apparently. Or Janken Queen. (Or World Series of Dice, but that’s a bit different.) I would love to see a ‘Best In Show’ style spoof of the poker world. The winner of the WSOP is usually a very good player who went on a lucky heater, or at least dodged an unlucky streak.

One thing poker teaches you is, variance is really going to vary. While I was a consistently winning micro-stakes online player, I once had a big drawdown over a month when it seemed like every time I went in with the best of it, I lost. I was astounded. People attribute far too much to skill. Taleb may be an ass, but ‘Fooled by Randomness’ is a classic. Nevertheless what you learn about luck from playing poker, you cannot learn from a book.

Ultimately poker is a fascinating, but slightly silly game. In tennis, golf, chess, a pro cannot lose to an amateur at the turn of an unfriendly card. You can’t have a Jamie Gold going on a huge heater, getting hit by the deck, and winning the WSOP, despite being an apparently mediocre player. All the hard work you can muster creates a couple of big blinds an hour of edge in a game where you have to risk your whole stack to cash in that edge.

Maybe that’s one reason why it’s a metaphor for life? An endlessly fascinating but perhaps ultimately pointless exercise, which we have a capacity for making great or terrible by investing with manufactured meaning?

Sometimes poker is how life works. You have to work hard every day to get a little better, exercise great judgment to stay in the game. And be all-in where you have the best of it. And if you play your cards right you’ll do well. But a couple of bad breaks, and you’re screwed. Graduate at the wrong time in the teeth of recession, pick a company or industry that goes belly-up and people no longer value skills that took years to master, get cancer. Hell, we’re lucky to be born in the right place at the right time and be at the table. All you can do is make good decisions and master yourself, which is the true object of the game. And let the cards fall how they may.

It was interesting to see Doug Polk quit the game. Burnout, depression, a more mature perspective on life? I wonder what Maria thinks about that?

The book alludes to the moral degeneracy of the poker world, but maybe pulls a few punches. If you view poker with detachment as an exercise in understanding risk, probability, yourself, and making good decisions at small stakes, it’s fun and healthy. When you make gambling your profession, taking others’ money by your wits, there can be something fundamentally problematic about the zero-sum aspect of it, about staking your worth on the outcome of the turn of a card, about the dark side of angle shooters, of substance abusers.

A used-car salesman can say he is providing a service, helping people get into the right car. Being a poker pro is a bit hard to rationalize. You’re providing an entertainment service, letting people challenge their wits against the best?

The jailbird Ed Norton character in Rounders illustrates the darker side of the game. Not a great movie but High Roller: The Stu Ungar Story illustrates it. There’s something weirdly intoxicating and addictive to gambling, to be good at poker you have to be obsessive, and these guys are often prone to addictive behaviors and not very healthy mentally or physically. The household names who become stars on ESPN2 go bust and beg strangers to stake them. I’ve seen ridiculous tantrums and chair-throwing (which does get you banned LOL). I’ve seen college students fresh off the bus tilt and lose a semester of savings in 30 minutes.

Poker is a great training ground for investing, but investing is a positive-sum game in the long run. Ultimately there is a social purpose, to defeat the dark forces of time and ignorance that envelop our future. The market is not always as fun and you can’t bluff the market, and it has its share of con artists and angle-shooters, but I think it’s a more proper object of talent for people who understand risk, expected value, human nature… and luck.