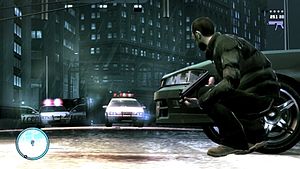 You didn’t change the game, the game changed you. Niko Bellic, Grand Theft Auto IV Everything that’s already in the world when you’re born is just normal; Anything that gets invented between then and before you turn thirty is incredibly exciting and creative and with any luck you can make a career out of it; Anything that gets invented after you’re thirty is against the natural order of things and the beginning of the end of civilisation as we know it until it’s been around for about ten years when it gradually turns out to be alright really. _ Douglas Adams

So here is my rant about CDS, a topic I know very little about.

Christine Lagarde has said that a Greek restructuring that would create a credit event is ‘off the table’. Now, inevitably, politicians talk out of both sides of their mouths to avoid roiling markets. But I have seen three different pundits talk about a Greek restructuring that would be done in such a way as to avoid triggering CDS default provisions. This makes no sense.

Greek 2-years are trading at 73 cents on the dollar, or a 23% yield, and CDS are trading at something over 1400 bps. Meaning you pay over 14% of the face value of a bond for insurance against it defaulting in the next year.

A restructuring is going to mean bondholders get something worth around 75% of par, so it will not exactly be a close call whether a default occurred in economic terms. So, one of two things are possible: 1) in the event of a restructuring, the buyer of CDS protection gets paid par, or 2) sovereign CDS are not worth the electricity it takes to conjure them up.

Clearly, anyone who is buying protection at 14% is calling Ms. Lagarde a liar.

But it seems on the face of it that you could buy CDS and bonds and lock in a decent yield, and a possible windfall if you get paid off early, which suggests that markets think that while holders of CDS protection will get paid off with a high probability, things are not as cut and dried as they should be.

That kind of fuzziness (dare I say corruption?) seems like an awfully big strike against CDS.

It seems like if CDS are a legitimate instrument, finance ministers shouldn’t be talking about how to circumvent them, and if finance ministers feel the public interest necessitates doing so, maybe the existence of CDS is not such a good idea in the first place.

Next issue: CDS change the game and make default in a situation like this a certainty (barring shenanigans). The way the game should play out is like a corporate takeover. The ‘troika’ of bailers-out buy up the debt in the market, or as much as they can without bidding it up. (Hey, it’s not insider trading if the government does it). When you can’t buy more, you go public and make an offer for the remainder, and say otherwise Greece defaults and you get nothing. After some back and forth most bondholders will tender.

But if you have bonds and CDS protection, you have no incentive to accept. The game is to force a default, and then hand over your bonds and get par back.

So the mere existence of CDS can make a technical default inevitable. Does it matter? In this case, maybe not much, except politically it always looks better to refinance the mortgage than to have your house auctioned off. However, in corporate cases, once bankruptcy protection is sought, things get more complicated and it becomes ultimately up to the judge. Things get a lot more expensive, complicated, and political.

It’s a bit similar to securitization _ when a mortgage gets carved up into multiple pieces and levels of subordination, it’s good to spread the risk around when things are good, but it gets a lot more complicated to work out when things go bad. A solution that might be globally optimal might be seen as favoring one class over another, there’s reluctance to reward ‘speculators’, etc.

A possible strike two against CDS.

Finally, let’s talk about the opacity. We may think we have a vague idea of who has lost money on Greek bonds. But some of these players might have hedged with CDS. And we have no idea who has been in the risky business of selling CDS protection. There have been cases where CDS outstanding were large multiples of the underlying debt. Is this going to bring down a bank? Who knows? The post-crisis reforms toward central clearing would make cascading defaults less of a problem, if central clearing is adequately capitalized and policed. But derivatives make financial statements far less useful than they used to be. You never know when a big hole might turn up.

I will skip the rant about manipulation and moral hazard, since only conspiracy theorists would say that shenanigans in thinly-traded CDS were the last straw that triggered the final downfall of Bear to the benefit of short sellers and manipulators.

When I got my first job 25 years ago, I thought Glass-Steagall was a barbarous relic _ clearly a bank could be very risky without being in the securities business, and the way to go was better living through math and things like VaR. If the financial crisis taught us anything, it’s that systemic risk comes from inadequate equity capital, opacity, complex interlinking, and moral hazard.

So I’m leaning towards Soros’s view, only generic, well documented and registered derivatives and financial structures should be traded, they should trade and clear on well-capitalized, well-policed, highly-disclosed exchanges, and by ring-fenced, well capitalized financial players and speculators (and players who are natural hedgers and need to reduce risk).

The reworking of the Wild West video game financial system hasn’t really started yet, but it should start soon.