Two differing views on UK and the EC. 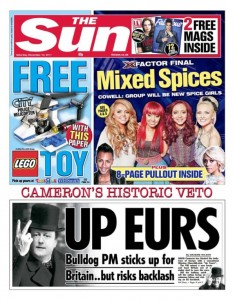 1) Cameron bungled and overplayed his hand. He could have won some guarantees for financial services in exchange for joining the budget treaty, but a blanket carveout of the City of London from EC financial regulation was not in the cards.

2) Inevitable outcome of UK exceptionalism. Since the UK became the only major country to opt out of the Euro, a Eurozone crisis puts the British in their own lifeboat in the storm, a bit less waterlogged and overcrowded. They don’t have an existential Euro problem, and there’s nothing in it for them to give up fiscal policy, having retained independent monetary policy. Even if they got major concessions for City bankers, their heart would still not be in it.

One future could be a smaller, more coherent Eurozone, a rival financial center in Frankfurt, escalating differences with the UK as a rogue offshore center and a country that benefits from free trade but doesn’t make sacrifices for EC solidarity.

Another possibility is escalating Eurozone crises, fiscal/monetary miscalculation, nationalization and misregulation that cripples the Continent’s financial sector, and economic and political turmoil that makes the European project founder, and the UK feel fortunate to have charted its own course.