I didn’t really post as much as I would have liked this year. I envy people whose thoughts come out in a more or less coherent, finished form. When I post something, I always think of what I really wanted to say after hitting ‘publish’.

Today, I’m going to just try to write for an hour and post what comes out, hopefully resisting the temptation to ninja-edit.

My buddy Josh does a post with quotes where a bunch of people say what they learned over the last year. So what did I learn?

Startups are hard. Saw VC Ben Horowitz talk a couple of times. This was the gist of one of his talks, I recommend it for anyone in startup land. What stuck with me was what he said about meeting Michael Jackson and mentioning how outrageous one of his moves in The Wiz was. MJ replied, it was harder than it looked, he had to do that going uphill! The point is, whenever you see someone excelling on stage, at the World Series, in Olympic gymnastics, they make it look easier than it is. When you have to do something new and worthwhile, however hard it looked before you started, you discover new layers of difficulty you didn’t know existed. Doing what your teacher showed you how to do is a linear or maybe polynomial problem. Doing something new and figuring it out as you go along is highly nonlinear, or non-polynomial. Until you figure it out, and it’s old hat and you wonder why it seemed so hard.

At the start of the year I launched this little mad science experiment, Linkfest.com. The basic idea is that everyone goes to the ‘most read’ page at Bloomberg, Wall Street Journal, Financial Times etc. But today, where everyone shares everything socially, and everyone is a curator, it should be possible to create a ‘most read’ page across all financial media by finding what the best ‘power curators’ are sharing. And ideally, ultimately create an ecosystem like reddit, where the best rises to the top, and the spam gets trashed, the best content creators and the best curators all get the following they deserve.

I learned that community filtering and crowdsourcing work pretty darn well. Linkfest.com got a pretty regular following of a couple of hundred visitors, thanks particularly to Josh, Fred, Will. But it’s sitting pretty solidly in the ‘trough of sorrow’ phase. Not totally sure if I haven’t quite got the features right…or maybe the design needs to be sharper…or maybe I just need to make it more viral and market it better. I don’t know. It’s also possible it’s overfitted to what I want, and it’s not the 10x improvement users need to alter their habits, and the real power users build their own custom news feeds with Twitter, Google Reader, Flipboard.

From mook to MOOC. I went through the Coursera Machine Learning course and learned more than I expected. The massively open online course (MOOC) education revolution is real, education is going to be disrupted as badly as music, news, finance, the post office, etc. (There’s a Shirky law that, if it is traditionally housed in a building with a Greco-Roman pediment, it’s going to get disrupted, because it’s a fat business model dependent on a trust heuristic that the Internet will tend to invalidate) If you haven’t already, check out some online courses and TED talks in 2013.

Next, will take the Stanford databases course, since everything I know about databases I learned myself, badly; and Damodaran’s valuation class.

Rise of the Machines. The other thing I learned is that, given decent data, with tools within the reach of a bright high schooler, machines can make decent decisions. We’ve reached the age of the smart machine. Any kid in high school today who grows up to be any kind of knowledge worker, is going to be primarily managing and assisting machines to do the work of diagnosing, solving problems, navigating, etc. Automation has hit the skilled manual worker pretty hard, but now it’s hitting the most skilled, and the consequences are going to be far-reaching. The future of jobs and wealth distribution is one aspect. We’re all going to have amazing robot assistants, autonomous drones, self-driving cars, robot cheetahs.

But we also have a surveillance state where everything you do is stored, and through some strange interpretation of the Fourth Amendment, there is no expectation of privacy or protection against the government capturing all manner of information (possibly including all domestic communications _ they won’t tell us, and possibly interpret a search as taking place only when it’s investigated, not when it’s intercepted), storing it forever, as long as they get some kind of rubber stamp before using it against you.

And we’re literally one step away from machines that can repair, design and build themselves.

We learned easy money cures all, at least in financial markets, in the short run. It remains to be seen what it cures in the real economy. The problem is the trade and investment and financial imbalances, and financial incentives, that led up to 2008 haven’t really been rectified. The US is in better shape because it had a more aggressive fiscal policy (initially) and monetary policy, and the fact that everyone wants to own US bonds. Super hard landing in China and euro zone breakup seem off the table for now. So the most likely scenario is continuing gradual pickup in growth, until one day everyone realizes the boat is leaving the station to get cheap loans, houses, and stocks, and a real boom in growth and inflation picks up. The Fed wants a little inflation to make people less underwater on houses, and debt easier to pay back. But once the inflation genie is out of the bottle, it’s awfully hard to put back. At some point downward pressure on inflation from globalization becomes a spent force. Demographics reduce supply without a corresponding reduction in demand. Unclear whether energy and commodities will remain as benign as global demand increases and long-term sustainability of US oil boom is questionable. And once foreigners realize the Fed wants to inflate and make them lose money on their bonds, the dollar drops, and rates go up, and then the long-awaited global trade/investment/financial sector rebalance is on. Helicopter Ben is living up to his name, but some day this war’s gonna end.

If voting changed anything, they would make it illegal. In politics, we went through a dysfunctional election full of sound and fury that doesn’t seem to have signified or resolved anything. Despite failing to get a majority of votes for Congress, Republicans are still in the majority of districts due to gerrymandering and an urban-rural cultural divide. They are in safe seats and impervious to threats from the left, but highly vulnerable to primary challenges from the right, and don’t pay any cost for stonewalling and prevaricating. So that’s what we get.

We learned that despite living mostly in the immaculate cyber-world of our mobile devices, Mother Nature always wins. The South Ferry station, just built with massive 9/11 rescue funds (thanks America) is still closed and needs to be completely rebuilt after Sandy. And the A train causeway to Far Rockaway is also a total loss. After an unbroken string of major storms, one can only hope this will not be an annual occurrence.

What ties all these threads together? We really need to design structures that align the interests of the individual with the interests of the whole, and allow both to adapt to meet new challenges. The world is changing too fast to keep up. And we’re failing badly. It’s all about market design, and our systems suck. 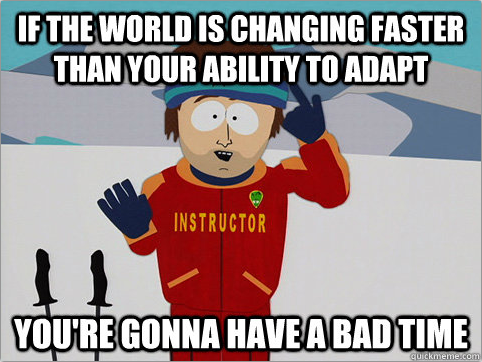 ← Social capital, or the lost art of not taking a dump in the community pool ‘Big Data’ →