*Let’s see if we can come up with an ideal spending plan for a retirement, if you have a guaranteed annual return, for different levels of risk aversion. * It’s probably been done before, but seems like a fun illustration of the power of numerical optimization with Excel, Python and DataNitro.

Suppose you are a 111-year-old male, and you would like to know how much to spend the rest of your retirement.

How much of your portfolio should you spend this year to maximize your lifetime spending?

The answer is obvious — 100%! There is no risk of shortfall in future years, assuming this life table holds up.

Suppose you have a guaranteed 5% real return. How much should you spend each year to maximize lifetime spending?

So once again, you should spend the entire portfolio!

You spend everything if:

Of course, in the real world, this is not a recommended or preferred retirement plan.

Real people care about the variability and risk of their income stream. To quantify that, we can use a constant relative risk aversion (CRRA) utility function.

the risk-averse retiree prefers a certain payoff to a risky payoff with the same expected value.

The form of a CRRA function is:

Where U is utility, C is consumption (spending), and γ (gamma) is the risk-aversion coefficient.

A highly risk-averse person (high γ) might value the risky payoff at $11, the certainty-equivalent (CE) value of the coin-flip. A less risk-averse person might want at least $12 (γ =2), and only a risk-neutral person would accept $12.50. No rational person accepts a certain $10 v. a minimum $10 and a chance at $15.

We can similarly discount an uneven stream of cash flows, ie $15 followed by $10, using the same CRRA utility function. It’s just a consistent way of discounting the variability of the income stream, either over time or a probability distribution. 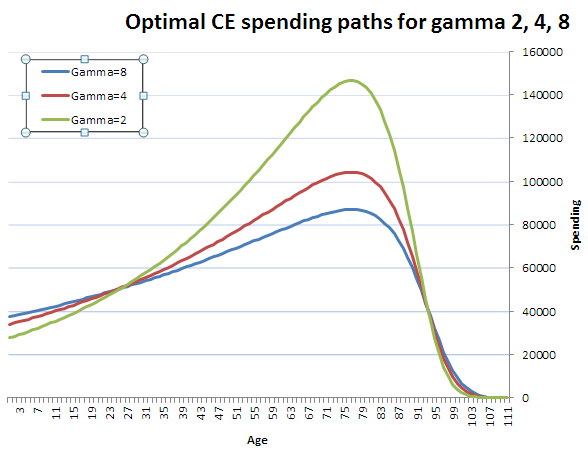 Voilà! Given a guaranteed 5% real return, and a risk aversion coefficient γ, these are the the spending paths that would have maximized CRRA utility, or certainty-equivalent spending.

Someone who retires at age 65, or any age, could pick the curve that matches their risk aversion, and just use the part of the curve starting at that age, prorating spending to match the size of their initial portfolio.

The intuition of the drop off after age 80 is, to get income at say 95, when your odds of being alive are low, you have to give up a lot of income at say 70. So if you want to maximize lifetime income, buying life insurance, joining an insurance pool and annuitizing those later years makes more sense saving for them all by yourself. Effectively, life insurance is like five people who each need $1 for the year where 20% of them are alive, so each only has to put in $0.20, and the one who lives gets the whole amount.

Hmmh… I wonder if it’s possible to run this same optimization without the 5% real return assumptions, but over historical stock and bond returns instead… To be continued.

← Bitcoin is the Linux of payments. And its killer apps will be for US dollars. Retirement plans that maximize certainty-equivalent spending, part 2 →