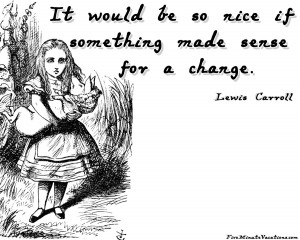 Curiouser and curiouser! — Alice in Wonderland. Having written about Greece the last couple of weeks, why stop now? TL; DR _ Still seems possibly under-appreciated chance of bailout deal falling apart before it really starts, and likelihood of Grexit medium term.

Let’s review where the key players are.

Schäuble keeps agitating for Grexit. Rough justice. And yet one can see the logic and consistency of his argument. At some level he is fighting the good fight. The deal’s long-term success is mathematically impossible. The politics preclude a deal where success is possible. So an orderly Grexit may be best for everyone.

Varoufakis is no longer a key player, but he was saying essentially the same thing as Schäuble. Fix the Eurozone or pull the Grexit ripcord. He was ready to issue a new currency and seize the Bank of Greece, but Tsipras nixed him. He suffered from smartest-man-in-the-world syndrome: right about everything except the need to find common ground with others to arrive at a solution.

Tsipras is an enigma. He went along with Varoufakis all the way to the last step, which is sort of like going all in, getting to the showdown and then folding. If you’re going to get cold feet, better to do it before burning all the bridges. Like Stalin’s son, he can’t seem to shoot straight when committing suicide. Maybe he’s constrained by his allies, maybe he has some invisible master plan. But he sure looks like he’s in over his head and screwed the pooch.

Merkel likewise seems to have gone along with Schäuble down the Grexit road, only to chicken out at the last step. She offered just enough that Tsipras would have to pull the ripcord himself, and he didn’t. I suspect she doesn’t mind triggering Grexit, she just doesn’t want to be blamed for it.

Lagarde seems to have missed a trick. Or the IMF is at war with itself. She went along with a bailout that seems to require further billions from the IMF. And yet, there’s doesn’t seem to be any way the IMF board can approve it. You can’t lend tens of billions of euros if there’s no sustainable way to pay them back. And the IMF staff and pretty much everyone agrees it’s unsustainable. Are they going to walk away after Lagarde agreed? Are they going to waive sustainability under pressure from Obama, Merkel, Hollande et al.? I wouldn’t bet on it.

Draghi seems to be doing everything in his power to help Greece, having stood up to Schäuble in the Eurogroup and already loosened ELA. If Greece goes, who knows who is next. He’s Italian, and US-educated, so he follows a pragmatic line toward the periphery.

The question of IMF participation looms large. Then, it seems unlikely the banks can actually re-open and lift capital controls, without Greeks rushing to empty them and move cash abroad.

Then, there’s the question of what happens next to the Greek economy. If the deal moves forward, the government and others pay all their overdue bills, the ECB fully stands behind the Greek banks and they reopen ahead of a possible restructuring, Greece could start to normalize.

But then, tax hikes and spending cuts will start to materialize. The deal is supposed to have automatic triggers that increase austerity if budget targets aren’t met. (Isn’t that special, a hard-wired pro-cyclical fiscal policy.) It’s like a doomsday self-destruct button for the economy. There seems a distinct possibility of a runaway collapse.

So, there still seem to be perhaps under-appreciated prospects of the deal running into trouble. And little prospect of long-term sustainability. And some risk of having the economy go south and needing another bailout earlier than expected.

No one is willing to make the sacrifices that would allow Greece to recover within the Eurozone. But no one wants to be blamed for Grexit. The result is an unsustainable deal that will lead to more pain, and presumably Grexit once the alternatives have been exhausted. I was wrong since I thought inability to reach an reasonable deal would lead to no deal and Grexit. (and Schäuble and Varoufakis seemingly playing for Grexit.) The surprise is the determination to do an unreasonable deal that solves nothing.

In behavioral economics terms, each side frames leaving the euro as a policy defeat. And yet, the point of the euro is to work together for peace and prosperity. It seems misguided to hang on to it when it is doing the opposite.

Austerity has led to economic collapse. Ratcheting up austerity is not going to fix it. Fanaticism consists of redoubling your efforts when you have forgotten your aim. — George Santayana

It’s a deal no one seems to want. Greece’s political will to implement a tough program is questionable at best. Even if they had the will, the numbers don’t add up.

Eventually, Stalin’s son got a prison guard to shoot him.

← The Garbage Fire That is Greece The Mathematics of Bluffing →