There is no racial bigotry here. I do not look down on n******s, kikes, wops or greasers. Here, you are all equally worthless. _ Gunnery Sergeant Francis Hartman

Against my better judgment, here’s a rant about race.

They say, on the Internet, no one knows you’re a dog…but here’s a controlled experiment: list a bunch of things on Ebay, some with a black hand showing them off, and some with a white hand. The one with the white hand will get higher prices.

This may set off cognitive dissonance that it was a poorly executed experiment, or that it’s meaningless. But I feel confident this result holds up to some degree in any careful attempt to replicate it. When was the last time you saw an ad with hands showing off a product in a mainstream media publication, and they weren’t white, usually female? (See also Airbnb while black.)

First degree: I inflict, support, desire harm on someone based on the color of their skin. Lynching someone, or calling them the n word, yelling “get out of ‘my’ country”, or wearing “Kill all whites” slogans or killing someone because they’re white.

Second degree: I assert that I don’t have anything against white/black people, but I am uncomfortable with my daughter marrying one. ‘Sorority racist’ as Chris Rock calls it.

Third degree: I am open toward people of many races in different roles, but I identify as a race, and have subtly different feelings, expectations, reactions, and actions toward people based on race.

Racism is complex, and we need more, better words to describe racial attitudes, like Eskimos have for snow. And no one is immune to subtle manifestations of racism, that third degree.

We’re a tribal, social, territorial, hierarchical, violent species. (See Desmond Morris.) And even if we were purely logical and rational, growing up in say New York, where people of different races talk differently, eat differently, listen to different music, watch different TV and movies, are somewhat segregated, and have different representation in different socio-economic roles, one develops a different set of expectations about the likelihood of attitudes and behavior from different races.

Lest you say this third degree doesn’t matter much, I refer you to the Ebay experiment and urge you to think about what the same means in the job market or housing market. Simple models suggest that modest preferences to be around some folks of your own race lead to a high degree of racial segregation, even if the starting point is well integrated. Over time, small differences add up to a lot 1.

I have seen this Ebay experiment arouse a strong reaction of cognitive dissonance. Libertarians say free markets cannot discriminate, the use of group averages as a proxy in the absence of other information is not discrimination, liberals respond indignantly, everyone starts pointing fingers and resorting to ad-hominems. Read the comments on the Ebay article for just a taste.

What do you do about it? I don’t know.

Racism is a little like liberty. Unconstrained liberty is not really a thing. Reasonable people strive for a system of reciprocal liberty, where decent people restrain themselves and are restrained by the law in an attempt to give everyone as much freedom as practically feasible. The freedom to solve an argument with fists or a gun is a non-starter in a civilized society. The freedom to use lynching and threats of violence to keep people from voting must also be restrained to have a decent society. One would hope, because people are decent and don’t do that sort of thing, but if not, through laws well enforced. Threats are contextual and the n-word, burning crosses, statues of Confederate generals can be implicit threats depending on context.

Reciprocal inclusiveness is sort of Rawlsian. The idea of ignoring race, sex, sexual orientation in how you see and interact with people is a non-starter. You can’t say, “I don’t see gender”, like the ‘Portlandia’ skit. Women in a workplace have issues men don’t. The answer isn’t to give men and women identical maternity and paternity leave. What one can strive for is a social contract, where a priori one group of people doesn’t have worse deal than any other. White males can score all the rhetorical points about how e.g. divorce court treats them unfairly, but if a priori you would never choose to be the other race/sex/orientation, or identify that way when you have a choice, it’s hard to argue you’re the one being treated unfairly.

Being white is a little like being tall. Most things get designed for people in a certain height range, and it’s generally an advantage to be on the tall side. Nobody wishes they were 4 feet tall. If you see a 4-foot lady who can’t reach a can of soup in the grocery store, you help her reach it. Does that mean tall people should be taxed more to make things more fair? No, but it’s certainly an argument for progressive taxation if arbitrary inherited advantages lead to significantly better outcomes. And we should try, within reason, to not make things more unfair than necessary to the differently sized. If a tall person lacks self-awareness or generosity to help, if they think everything should be built for people of average height, if they say little people get an unfair advantage because they have more room in coach and you have to help them out in the grocery store, they’re just being assholes in the first degree.

If you had college admissions based purely on an admissions test, which happens in many countries, you’d have a lot more Asians. Maybe a lot of top colleges would be like Caltech’s 45% Asian student body. By the numbers, white males are the most frequent beneficiaries of affirmative action at elite colleges, who, by the grades and test scores, really have to favor them over women and Asians. (And don’t even get me started on legacy admissions) Much was made about blacks at the Oscars, but here’s the entirety of Asian nominees (not winners) for Best Actor/Actress: Ben Kingsley, Yul Brynner, Merle Oberon. Something seem off? Maybe Asian performers have more to complain about with regard to access to opportunity than black folks. Ask Aziz Ansari. If you go 100% race blind, you perpetuate whatever existing advantage some group has. So be careful what you wish for.

Is it wrong to put a modest finger on the scale to get outcomes that are more representative? I think it is a proxy for fairness because we haven’t all had the same chances. It is also practical because society is better off if its elite and political leadership is representative.

A modest affirmative action thumb on the scale of is the lesser of two evils. Some affirmative action should kick in when an group is, say 50% of the representative number, and should kick off when it starts to reward demonstrably inferior candidates, or where further action leads to more gaming the system than improved fairness.

Disadvantaged and unpopular minorities should expect fairness from democratic government _ that’s what the Bill of Rights means. But the kind of strong government that acts for fairness can be oppressive in the hands of the wrong person

People throw around accusations of racism as if people who are racist are evil “others” who must be punished. But everyone’s a little bit racist. We’re neurotic, because something that is part of all of us is treated as a disease or a crime against decency.

We should all do our best to treat people as individuals, recognize that we are flawed and will never do so perfectly, and be reasonably tolerant of the shortcomings of others. And at the same time draw some clear lines about what type of racist action and language is not acceptable in a civilized society, and not allow the more angry and disturbed souls among us to poison the well. And see what we can do, within reason and without trampling the rights of others, to create a fairer society.

Recently, online comments and mobile video have surfaced a lot of vile behavior. Part of me cringes when I think about the lessons children take away from that. Another part of me is sort of glad that it’s exposed. If people say that in comments, they were probably saying it to kids in their homes. Maybe it’s good that people can see things as they really are, and act accordingly. Then I cringe some more when I see that having this stuff out in the open, has, for some people, made it more acceptable. In some version of the backfire effect, people are making even stronger claims that measures to reduce bad police shootings or increase the number of women engineers are unfair special pleading. Here’s hoping we find the strength to push against this surge in uncivil behavior and continue progress toward a more fair society. 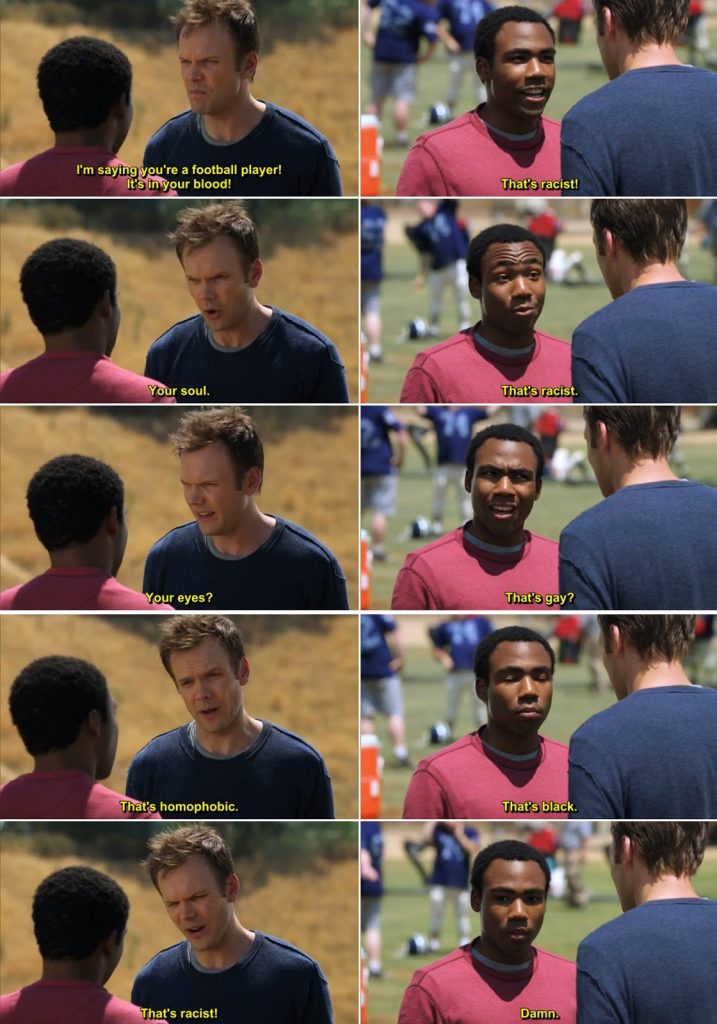 1 And if you read social media and comment sections, there sure are a lot of people who go well into degrees one and two.

← What if everyone was a passive investor except Warren Buffett? The Top 100 People To Follow To Discover Financial News On Twitter, May 2016 →