I posted earlier about some of the trends in the financial Twittersphere. It’s been a year since we posted our last list of people to follow on Twitter for financial news. Time for an update!

See below the table for a little technical discussion, and a fun interactive map.

Here’s our map of ~350 Twitter accounts, using a force-directed network. Everyone who follows an account or posts similar links pulls it toward them, so we see Twitter accounts arranged into broad areas: Asia, Europe, US markets, tech, media, econ, politics. People who are in the center are pretty equally followed by folks in all parts of the map, whatever their varied interests. Bigger labels represent people with larger followings. 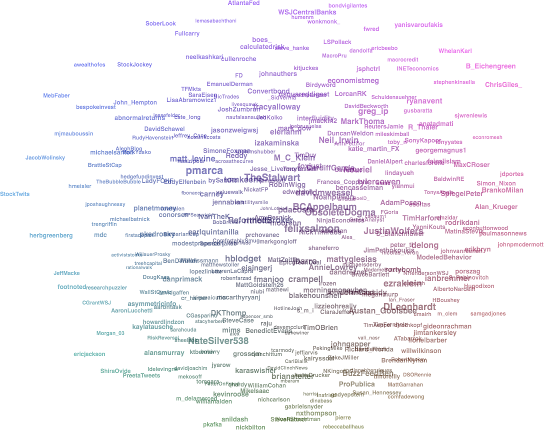 Here’s a link to a fun interactive version.

How does this work?

We start with a network centrality analysis, building a graph of who follows whom and finding the people with the largest number of most influential followers. Those are probably people who will play an important role in transmitting important news.

Then we trim the list to people who are good curators: they post links to a variety of good content in a frequent and timely manner. We cull people who may be central, but don’t post a lot of good timely news links.

Who do we cull?