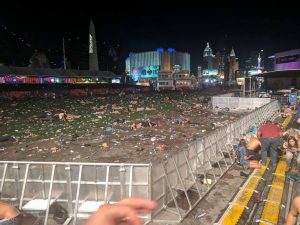 Here’s a Sunday rant on guns.

I’ll start at the outset by saying I’m not a huge fan. I was a kid in New York City in the 70s when there were 5 murders a day. Being a city boy, and especially at that time, colors my reality. It’s not great to live in a town where most taxi drivers have a weapon under their seat, many bodegas have a weapon behind the counter, stray bullets are a risk to consider. Knowing there are a lot of crazies out there colors my reality.

There are some people who make the argument that a society where more people are armed is somehow better. I’ve seen it and it’s not. If you don’t understand that the point of politics and civilization is to not sort differences out with weapons, you can probably stop reading, if you somehow got this far.

The argument that ‘you can’t regulate evil, if you regulate weapons, only criminals will have weapons’ is absurd on its face. You criminalize the activity, and you also try to reduce harm. We try to minimize harm from all kinds of devices and activities, from Kinder eggs to Sudafed, even if it’s not 100% effective.

‘The only way to stop a bad guy with a gun is a good guy with a gun’ is also absurd on its face. Of course, the good guys, i.e. trained law enforcement and security personnel, should carry guns when necessary. And also, of course, if it’s possible to keep LV-style MacGyver automatic weapons out of the hand of the bad guy or crazy guy, you should try to do that.

‘Guns don’t kill people, people kill people.’ Yeah, people with guns. Do you want to keep nuclear weapons out of the hands of Kim Jong Un? Then you understand why I want to make it harder for my crazy neighbors to have guns.

‘Terrorists can kill people with knives or trucks, do you want to ban those?’ The old slippery slope argument…you’d have to ban sticks and stones too. Well, until a lone lunatic kills 58 and wounds 500 with a knife, that is the dumbest argument in the world. And maybe it would be a good start if we applied motor vehicle licensing, safety, insurance standards to deadly weapons. I have seen, with my own eyes, libertarians question the morality of having a DMV. Inexplicably, the same manifestly stupid argument gains credence when applied to managing the externalities and costs imposed on the innocent victims and on the public by deadly weapons.

If you live in a relatively safe city or suburb and you think a gun makes you safer, you’re almost certainly wrong. You’re much more likely to get shot if you own or carry a gun. You may think you’re a responsible, well-trained, level-headed gun owner, but probably so did every other parent who got shot by a toddler. You’re probably not as special as you think. On a bad day, normal people are susceptible to alcohol, murderous rages, depression and other mental illnesses, and guns don’t make any of those things any better.

The cost of easy access to guns is very high. This Las Vegas massacre is going to be 10 figures of direct costs for medical, first responders, lawsuits. Years of recovery from physical and psychological trauma for survivors. Then there are all the loved ones who will not have a spouse, a parent, a child. Then there is the fact that every cop who approaches a car has a risk of encountering a gun, the reality that their first responsibility is not to serve the public but to live through the day and go home at night, making trigger fingers itchy. Despite the fact that that society is less violent than ever, acceptance of police-state tactics is increasing. Places with fewer guns have fewer murders, have higher trust in law enforcement and in society generally.

That’s an example of what I tend to view as the fascist-libertarian nexus. Arguments in the name of liberty lead directly to and justify authoritarianism. As George Washington said, “Arbitrary power is most easily established on the ruins of liberty abused to licentiousness.” People make the strange argument that the Second Amendment is a check on tyranny. Strange, because the Second Amendment wasn’t put there to license war against democratically elected government, or treason, or rebellion. When a minority group protests, with some justification, that a tyrannical government is using excessive force against them, with bad shootings caught on video on a regular basis, the people who self-identify as pro-liberty seems pretty quick to label the protesters as terrorists. When it’s oppressed ranchers on Federal land, it’s one thing, but when it’s Black Panthers marching in the streets with guns, even Ronald Reagan and the NRA can agree that open carry is an act of violence. When the disenfranchised try to exercise freedoms, even to protest peacefully, it somehow becomes a huge problem. If you’re making freedom arguments which only apply to people who are already empowered, it bends toward fascism and feudalism.

Let’s face it, a Muslim does this, people go nuts. It’s a new 9/11. They hate us for our freedom! A black man does it, you’ll seem some colorful language on social media. White man does it, crickets. It’s the price of our freedom! You cannot tell me race, fear of the ‘other,’ latent prejudices, aren’t key factors driving the disparity in emotional and policy response.

The Second Amendment maximalist argument is, in my opinion, a complete red herring. The Second Amendment contains the clause, “a well-regulated militia.” It explicitly foresees regulation. The NRA conveniently omits that clause, perpetrating what Warren Burger called a fraud on its extraordinarily gullible members.

The Second Amendment came out of debates over desirability of standing armies, need for slave patrols, fears that the Federal government would ban slavery or otherwise intrude in the affairs of individual states. The ‘well-regulated’ clause is saying, the motivation of this amendment is that the Feds may not ban and assume functions of legitimate state and local armed militias, police forces, national guards, etc.

Of course it also bears on individual rights to bear arms. But at some level you have to draw a line and say people cannot have personal RPGs, machine guns, WMDs, or something. Machine guns and guns above .50 caliber seem like a pretty reasonable limit, which is currently enforced (with obvious loopholes, i.e. Las Vegas.). A system to keep guns out of the hands of known organized criminals, convicted felons, domestic abusers, mental patients, and people who could not be part of any ‘well-regulated militia’ seems both reasonable and falling clearly within the language and intent of the Second Amendment.

When you read any part of the Constitution, or any law, you need context. The First Amendment says Congress shall make no law abridging freedom of speech. But you have to read it, or any law, as “you shall not, other than to the extent reasonable and necessary to protect other rights and enforce other parts of the constitution.”

Many, many crimes are essentially speech: trademark infringement, fraud, conspiracy, child pornography. You cannot argue that the First Amendment means you cannot be convicted of fraud, or conspiracy to commit murder. Well, you can argue that but you will lose. Once the speech becomes the nexus of a criminal activity, it is no longer just speech. In order to preserve the other rights in the constitution, like patents, it becomes necessary to construct reasonable limits around what is considered protected speech.

These are common sense reasons why regulation around guns is unavoidable and explicitly Constitutional. That being said, I recognize that every place isn’t New York, people have strong views about guns, there are different cultures and realities on the ground. If you’re in a rural area with no law enforcement response within an hour, exposure to nearby drug and human trafficking, etc., the context is very different from being in a safe city or suburb. And even if not, there are just different cultures and views on the matter which should be respected in a democratic society.

I accept that people in Maine will have a different view of firearms than people in Boston, so for the most part, I would leave the gun question to states and local governments.

However with freedom of travel and commerce, you cannot effectively restrict guns in Boston if anyone can drive to Maine, walk into a store, buy firearms, get back in the car, and drive back to Boston. (or Chicago/Indiana)

Here is the approach that would make sense to me.

In order to enable state and local regulation, you must have Federal registration of all firearms. You want to own firearms for self-defense, hunting, sport shooting, you and your guns have to be in a national database. The gun’s ballistic signature is in the database. Your fingerprints are in the database. You want to sell or gift the gun, you have to make sure to update the database under penalty of Federal law. Whenever the cops pay you a visit, they get a popup noting what guns are associated with your address, car etc. A crime gets committed, the cops look up who has the weapon and what its chain of ownership was.

If you are a Boston resident, you buy a gun in Maine, the Boston PD gets a popup. They maybe pay you a visit, ask you where the gun is, remind you of the local gun laws. If it’s for skeet shooting at your place in Maine, that’s fine. Just comply with your local laws and keep the records updated.

Local regulation, which states and municipalities might wish to consider:

This would be the American way, I think. Move the debate to the local level, so it’s not, Washington wants to take away your guns, and let local communities determine what common sense means to them.

We’re in a vicious spiral of loss of trust in government, institutions, each other. Americans support gun laws that would make a difference, but can’t get them passed, further eroding democracy and trust. They don’t trust the government to keep them safe (even though it’s hella safer than it used to be), so they buy guns. Then every argument carries the risk of deadly escalation, whenever someone reaches a breaking point there are potentially dozens of casualties. Then cops militarize and sometimes escalate unnecessarily, further worsening trust.

We don’t want to go back to the Wild West. Harsh local restrictions probably won’t make a very large difference in gun deaths. But a comprehensive approach would reduce gun deaths, the terrorism threat and irrational fears about it, and help restore trust in cops and democracy.

It’s probably going to get worse before it gets better. But it’s up to us to remake those institutions and that trust, or turn into Argentina with nukes, or worse.

← Machine Learning for Investors: A Primer (Alpha Architect) The Bitcoin crash is coming →