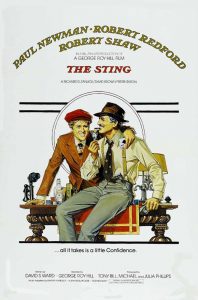 Confidence men are hardly criminals in the usual sense of the word, for they prosper through a superb knowledge of human nature; they are set apart from those who employ the machine-gun, the blackjack, or the acetylene torch. - David Maurer

There are old-time classics every investor should read: Reminiscences of a Stock Operator by Edwin Lefèvre, Extraordinary Popular Delusions and the Madness of Crowds by Charles Mackay. Maybe Theory of the Leisure Class, The Way We Live Now, Only Yesterday.

We can add David Maurer’s 1940 The Big Con. It’s an incredibly rich sociological and linguistic study of the underworld of grifters and marks in their heyday, and the basis for the all-time great movie The Sting.

Wall Street is the land of castles in the air. Every few years, you get a con job seemingly as brazen as The Sting: John Law, Gregor MacGregor, Charles Ponzi, Ivar Kreuger, Tino De Angelis, Eddie Antar, Bre-X, Barry Minkow, Jordan Belfort, Bernie Madoff, Sam Israel, Allen Stanford, the list goes on. And those are just the big ones; small-time schemes and vanilla accounting scandals are a dime a dozen.

Let’s review the elements of the big con as exemplified by The Sting, and see if it teaches us how to avoid becoming victims. <a href=’/2018/08/what-i-learned-from-the-sting-and-david-maurer/#easy-footnote-bottom-1-6678’ title=’Also worth keeping in mind <a href="https://www.influenceatwork.com/principles-of-persuasion/">Cialdini’s 6 principles of persuasion</a>:</p>