The StreetEYE news aggregator experiment came to an end on 3/31/2019. Many thanks for supporting StreetEYE over the years!

A few people have asked about alternatives. 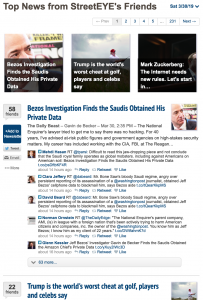 Or follow some or all the top people @StreetEYE follows (or @TheLinkfest, the short list) _ browse them with our visualization tool here _ and make your own custom newsfeed.

StreetEYE used an algo to find people to follow, and that part is missing, along with a bit of spam-filtering, but the Nuzzel experience is very good.

A few people asked about the reasons for shutdown. Answer: lack of traction, technical debt, platform shenanigans (sites blocking StreetEYE from spidering/scraping, reducing API limits). It needed a reboot but it really didn’t have enough traction to justify it. Also, the platforms might have killed it off regardless. It was always playing in someone else’s garden.

Why now and not a few years ago? Because I loved the FinTwit community.

I hope StreetEYE let FinTwit find people to follow, learn from, build professional relationships with, and brought a smart audience to the best news stories, publishers and social accounts. Thanks especially to people who reshared and evangelized it.

If StreetEYE let people find news that mattered, credit belongs to the people who created and shared stuff that mattered. If it didn’t, sorry! Regrets to everyone who didn’t like being aggregated, thought it followed the wrong people, blocked me for being a jerk, or otherwise thought it sucked.

I believe it was Clay Shirky who said, if your business model involves big expensive buildings with Greek columns, there’s a good chance you are about to be disrupted. Because fundamentally businesses like that are about trust and an aura of exclusivity, and the Internet allows new social and trust hierarchies.

But a lot of incumbents that maybe seem ripe for disruption aren’t cooperating with that theory: Harvard, Bloomberg, Goldman Sachs.

One of the things Harvard, Bloomberg, GS, YC have in common is they are all essentially social networks, with rites of admission, imprimatur of approval. There’s a lot of proof of work in Eugene Wei’s words, if you are an employee or even a mere paying client.

And they have been disrupted, in the sense that if you look at the people who are there today vs. 30 years ago, they are a lot smarter, harder-working, tougher. A lot more people know how the sausage is made, and don’t just buy something because Merrill said so.

It’s a better world. Some of the monopoly rents may still be there, but a lot of the prestige has gone out, and it’s a lot more competitive. Look at research reports from the early 1980s, good grief.

Social status is a classic bias/variance problem. If you get a Harvard MBA or Ph.D. your proof of work is the ability to jump through academic hoops over the long haul, and look and sound a certain way. That leads to strong biases in the types of people who successfully navigate them, or exploit them, like Elizabeth Holmes.

Disruption, new social networks, allow people who don’t fit the mold rise to the top. But things can go to the other extreme. When you have social network ‘influencers’ who do it all on their own, sometimes they have a lot to offer, sometimes very little.

For a functioning society, you want status indicators and ‘proof of work’ that allow new people to rise to the top. But institutions also have to select people who work hard, have skills, decency, judgment. Criteria developed over centuries, like nobility, or all their white male ancestors went to Harvard, aren’t fit for purpose when the world is rapidly changing.

But there’s definitely an adverse selection problem that social networks haven’t really figured out, how to make the good stuff rise to the top, filter the noise, and also let new voices be heard. And that’s something I tried to work on.

Marty Baron who edits the Washington Post is a 1000x curator. He’s a rare breed, and there are a lot of great curators out there. Social media doesn’t really reward the great curators. On Reddit, if you’re first to post something that gets traction, you get a lot of karma. You don’t get any karma for voting early for quality winners. And quality curators don’t get more influence.

We have an Idiocracy problem, and 0.1x curators drown out the Marty Barons with cat pictures. Or worse, Jacob Wohl or the Infowars guy with manufactured viral nonsense.

(I hasten to add, Reddit lets good stuff float to the top and kills a lot of bad stuff and has proved resilient where its Usenet ancestor collapsed. But toxoplasma of rage ends up being what it’s famous for.)

Anyway, I think that’s a big challenge, and Ray Dalio is onto something important. We need to figure out what real trust looks like in the social media age. We need better filters that identify quality content and curators. And I think StreetEYE actually worked pretty well most of the time.

Another challenge is the user experience. Being ‘too online’ is a little crazy-making.

There’s too much stuff. There’s a time dimension, a topic/context dimension, and a quality dimension. I think this UX trilemma screws it all up. On Reddit, if you post a brilliant reply deep in a thread, it gets buried despite being high quality. And on Twitter, the algorithmic feed surfaces tweets out of context when they get a lot of engagement. Sometimes they get totally misunderstood and ratioed, or worse. So the ideal tweet becomes this self-contained ‘fortune cookie’. The medium truly is the message and people adapt to it. And in a lot of cases it’s completely crazy-making, toxic. We are building a dystopia just to make people click on ads.

Anyway, software is eating the world, and a lot of the social experience is mediated by these devices, and we will need to get better at figuring it out. AI is amazing and algorithmic feeds seem to be how the world is going.But I wonder if it might be time for some of those weird sci-fi 3D user interface visualizations to navigate social, and the massive amounts of online info and complex relationships.

Looking forward, at one end of the spectrum you have crypto, which is kind of about making do without trust. I think it’s useful in some cases, like Venezuela, or some coordination problems where you don’t want a central authority and all the agent-principal problems that go with it. But mostly I think the idea of a trustless society is completely dystopic.

At the other end you have a surveillance state, where we are all watched over by central machines of loving grace. Social combines the worst of 1984 and Brave New World. We don’t just have Siri and telescreens in our bedrooms, we carry them everywhere and are addicted to them. And then the algos rank our ‘social credit.’

I think innovation that finds great content and people, connects them and builds high-trust communities is possible. It made FinTwit possible. But I think we kind of messed it up. I have no doubt the next iteration, maybe Social 2.0, will be better than the last.

Mostly, many thanks for being part of this experiment, and look forward to continuing to interact in other ways online, and in person!