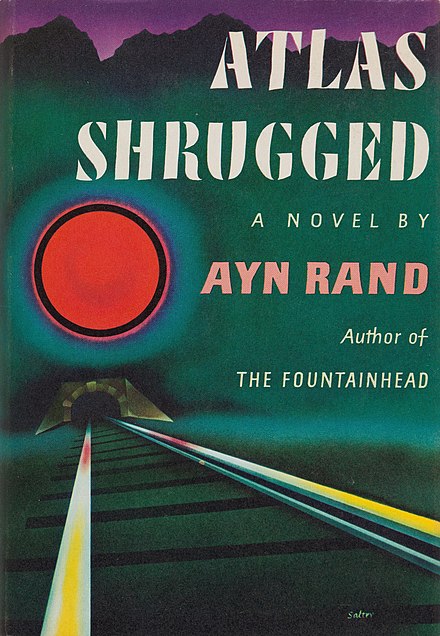 </a> I have been reading the poor reviews of Atlas Shrugged. I feel almost disappointed that it is by collective consensus a steaming turd. I would welcome a thoughtful movie about an interesting thought experiment, and I think the country could use a rare substantive debate about the size and role of government.

I like the libertarian ideal of as much economic and personal freedom as possible, consistent with the equal liberty of others.

Nevertheless, people who believe in Libertarianism or Objectivism as a practical political ideology are a bit wacko.

Communists made the unfortunate claim that the individual doesn’t matter, everything is the collective. Individual property is illegitimate, every speech or action is good or bad depending on its impact on the collective. It was a terrible, harmful corruption of an ideal of equality to say individuals don’t matter, only the group matters.

Libertarians make the opposite claim, that individual rights and liberty are all that matters. This reaction to a profound error leads to another profound error.

There’s a part of The Fountainhead where the talented architect Roark makes a deal that he’ll design housing for the masses, if it will be built exactly as he designs it. The guy he makes the deal with can’t deliver the goods, and through the political process lots of changes get made. Roark blows up the building, and in his trial says that he had the complete right to dynamite it because it would not have existed without him and it had already been destroyed by the additions made by losers, and he’s acquitted.

What about the investors who paid for the building? What about the other professionals who worked on the building, engineers and electricians and engineers? It couldn’t have been built without them, did they have an equal claim to destroy it? Isn’t it distinctly possible that Roark’s great design was an evolution of other great masters he learned from? Perhaps they might have marveled at his brilliance, but might some of them have also felt a desire to blow it up as a bastardization of their own work?  What about the people who paid for the building and might have been sheltered happily in it? Was Roark trampling on their right to realize themselves by destroying the group’s creation?

Communism failed because we humans like to own stuff, express ourselves creatively and realize ourselves as individuals. Libertarianism is equally misguided, because we do almost everything worth doing as groups, and group identity (and the politics that go with it) are genetically hardwired into us. Anybody who’s been to a stadium knows we’re tribal. The fashion industry and organized religion have viable business models based on our desire, not just to distinguish ourselves individually, but express our affiliations and seek meaning in our lives as part of a larger group.

These are complementary aspects of ourselves. We’re individuals, and we’re interdependent. Any practical ‘ism’ has to balance these two.

The maximum liberty consistent with the equal liberty of others: I’m with you up to there. When you start saying the group has no right to impose norms, values, duties and responsibilities on anyone and restrict their liberty, that all human behavior should be based on voluntary cooperation, and all taxation and regulation are illegitimate taking by force, you’re an extremist.

The idea that a modern society could function at a high level without a strong and sometimes intrusive state is wrong. There are laws against things we all agree are immoral, like violence and theft. There are also laws like traffic rules and property zoning, that solve coordination problems. Then there are government activities around public goods like roads, subways, defense, and I think public health (pollution, food safety, medical care) and education fall into those categories.

And then, if you create property rights around these, things, you end up with it somehow being OK for concentrated private power to do things that would be utterly immoral if an elected democratic government did them.

It is very true that there can be a fine line into paternalism, ignoring market incentives, overreaching beyond the area government can be effective, and favoring politically privileged groups. But to be against vaccination requirements, or airliner safety regulations and inspections, or collective action by common agreement against other threats is madness. To think unfettered freedom can solve all problems seems like magical thinking. It seems more likely to give rise to feudalism and mafia rule, as the strongest abuse their power, and people accept rules that entrench powerful interests as a substitute for chaos.

← ‘Bretton Woods 2’ From the unthinkable to the inevitable: why the Euro is doomed →