Once again, people are debating here and here and here whether the GSEs like Fannie Mae and Freddie Mac caused the financial crisis. I’m with Barry Ritholtz _ it’s a case study of confirmation bias in action. If you are predisposed against X, the financial crisis was caused by X, where X is ACORN, or the CRA, the poor, minorities, Fannie Mae, regulations, unions, going off the gold standard, taxes, deficits, Goldman Sachs, hedge funds, and of course, the Fed.

Additionally, the ‘blame-the-GSEs’ meme is a focused PR campaign by free market fundamentalists and banks who want to deflect blame from themselves, and roll back weak beer reforms.

Now, the government did not cover itself with glory. And everything was interrelated. The crisis is over-determined, a whole bunch of things collapsed at the same time, and you can’t say definitively which was the final straw.

Here is history as I see it, with my own biases.

I only have a couple of gray hairs, and yet I can remember a time not so long ago (late 80s) when there was no interstate banking, interest rates were regulated (70s), and Glass-Steagall prevented banks from investment banking activities like trading and underwriting securities.

Back in the prehistoric times when GSEs orginated (1930s for Fannie Mae, 60s for the others), one could make a case that there were a lot of small banks who knew their communities well and had a lot of good lending opportunities, but were capital-starved due to illiquid capital markets (not to mention Depression-era economic conditions and the resulting regulatory regime). The GSEs told banks that if they made conforming loans to GSE specs, the GSEs would buy them, guarantee them, and sell bundles of them as bonds. The banks could make a profit, free up capital, and redeploy credit in their communities. And the GSEs would make a profit, since the bonds with the guarantee would sell for more than the cost of buying the mortgages. There were no national banks capable of creating a standardized mortgage market. Investors, not having any ability to do loan-level analysis in pre-computer days, would not buy such bonds without a guarantee. So there was a rationale for Fannie and Freddie, if you bought the argument that housing capital was excessively scarce due to primitive capital markets, and the government restrictions on those markets’ development were necessary and unavoidable.

In the 70s, inflation and interest rates soared, depositors fled banks for money market funds, and banks’ cost of funds soared above their regulated lending rates. The ‘3-6-3’banking model _ take deposits at 3%, lend at 6% and be on the golf course by 3 _ shattered. One policy response was deregulation of rates on deposits; another was allowing S&Ls to invest in just about anything. This turned into open season for charlatans and led to the S&L crisis in the 80s. In the 90s came the end of Glass-Steagall, massive bank consolidation, deregulation, and an improved interest rate and tax climate _ a golden age for the banking industry.

One would not say that housing and banking are sectors in which government policy has played a minor role.

Also in the 80s, telecoms and computers drove development of liquid mortgage markets, with sophisticated models, complex securities, and data readily available to banks and investors. Wall Street made immense profits issuing CMOs backed by GSE mortgage bonds, and then by private mortgage pools. This resulted in a tug-of-war between Wall Street and mortgage originators. The banks and S&Ls looked at the fortunes Wall Street was making securitizing, and started their own captive securitization operations. Wall Street created captive mortgage originators – the worst of the worst in underwriting standards, because they never had local real estate knowledge and an underwriting culture to begin with, and were originating to sell.

This is the key point at which the plot was lost, and the original justification for the GSEs dissolved. There was now a well-developed, national liquid market for mortgages of all shapes and sizes, and it did not need a government guarantee. But the GSEs were still there, making money by monetizing the now-implicit government guarantee. They justified themselves as keeping housing affordable (today they’re justified as supporting house prices, go figure). It’s not really clear why redirecting resources into more square feet and cathedral ceilings in McMansions was in the public interest, but that’s what voters wanted, judged by myriad single-family housing subsidies. And the money the GSEs were making, monetizing the cheap government guarantee and holding onto large volumes of high yielding mortgages with lots of leverage, and redeploying profits into lobbying, didn’t hurt their case. 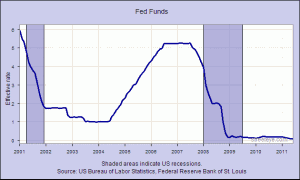 After 9-11, Greenspan dropped rates to previously unheard-of lows for an extended period of time, setting the stage for a housing bubble.

Lending and securitization models were based on historical lending standards and default rates. But things had changed. The whole lending culture of the conservative local banker had turned into hard-sell mortgage brokers manipulating computer underwriting systems to originate mortgages, which banks would flip, instead of holding to maturity. Everyone from the mortgage broker to the institutional bond salesman was incentivized more about commissions and bonuses, than long run default rates. Once everyone was a flipper, mathematical models based on buy-and-hold were invalid.

Risk-based bank capital standards put a premium on AAA bonds and and created big demand for them. Credit rating agencies therefore used the sketchy mathematical models and rubber-stamped bogus AAA securities. The ratings were preposterous _ a AAA should be something that is safe even in an economic depression, and some ‘AAAs’ would be wiped out with 5% default rates. But they were sold to sophisticated institutions with a wink and a nod, and the credit rating agencies were paid handsomely for their trouble, far more than than for lowly munis. This naked regulatory arbitrage stoked demand for CDOs and CDO-squareds, which increased demand for mortgage lending to create them. Dumb-money guarantors like AIG, MBI, Ambac believed the math and thought they could get free money providing credit enhancement. Credit rating agencies obliged guarantors by blessing them with AAA ratings too, despite ludicrously thin capital bases compared to vast obligations they were guaranteeing.

The result was a big bubble and housing crash. All the elements Kindleberger talks in about in his dry but essential classic Manias, Panics and Crashes were present: easy money, ‘this time it’s different’ new economics (land running out in fully built-out metropolitan areas and pent-up new household formation), new financial instruments like CDOs and option ARMs, people buying for appreciation/flipping instead of long-term, greed overcoming fear as people see their neighbors getting rich. Everything played into the kind of financial instability George Soros talks about, where buying begets more buying.

How did the GSEs respond? As bank and non-bank lending standards were relaxed, their market share declined, and they started relaxing standards as well. As the mortgage market came under stress, their capital base evaporated, and in September 2008, they were placed in receivership. A week later, with mortgage markets crumbling, Lehman collapsed. It later emerged Lehman had been cooking the books for an extended period of time to cover a huge hole in their balance sheet.

This is how I rank the players.

The triple crown, in my humble opinion, goes to the credit rating agencies. I think if it hadn’t been for those bogus AAA ratings on CDOs, the regulatory arbitrage-driven demand for bad NINJA loans (No Income, No Job or Assets) would not have existed. Without unspeakably ill-advised AAA ratings, thinly-capitalized guarantors like MBIA would not have been in a position to do credit-rating arbitrage, and magically bless junk into AAA. (Worth remembering today, when rating agencies have morphed from lap dogs to rabid wolves threatening to downgrade the US’s credit rating. Can’t help wondering how their model benefits financially and politically from that.) Then the banks’ failure to maintain adequate lending standards, then Greenspan’s rate policies. (Skipping over regulators for a second).

GSEs 1) followed, but did not lead the rest of the market to lower standards 2) had more conventional, low-risk loans, despite forays into Alt-A, subprime and negative-amortization ARMs. Their portfolios performed better than the average bank portfolio.

But their model of using a bunch of cheap implicitly guaranteed debt to buy a bunch of mortgages with a lot of leverage turned them into undercapitalized big dumb banks. When the storm hit, they were doomed.

I think it’s safe to say the GSEs did not help, but were not the sole, primary, or major causes of the housing bubble or financial crisis. The best thing to do at this point is gradually run down their portfolio and activities, and sell them off.

And this story just explains the existence of a housing bubble. Now you have to ask yourself, if there was a robust financial system, would the housing bubble have caused its complete collapse? For that you need the moral hazard, opaque interconnections, and high leverage.

And this is where the regulators came in _ they aided and abetted a structurally unsound financial system, with insane amounts of leverage, figuring banks that wanted to stay alive would police themselves; allowed these opaque domino interconnections such as OTC derivatives to flourish, and did not stop no-money-down, toxic and predatory products. Regulators and central bankers are not going to prevent bubbles, markets breed them like Kansas breeds twisters. But they can architect a financial system that will not crumble disgracefully, and require a government bailout which would be humiliating if bankers were capable of shame.

In the early 80s, resource stocks like energy were a huge chunk of the S&P 500, and inflation-battered financials were tiny. I expect to see that again in my lifetime. It will be painful and dangerous getting there, especially for a lot of financial BSD types. It’s always convenient to have a bogeyman to blame, like the government and the GSEs.

← The debt limit and the bond market State of Play →