Tucked away in the neglected items in the ‘Tools’ menu above, you might have noticed the metaphorical ‘Cat Food Calculator’.

The name may not be totally tongue-in-cheek in our world of neglected defined-contribution plans, depleted by poor performance and post-crisis raids.

The idea is pretty simple: 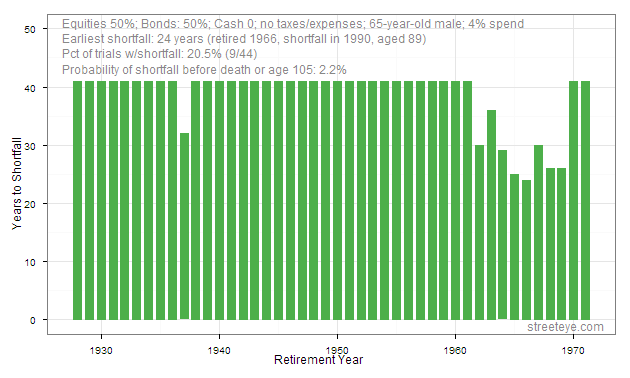 Seemed like a pretty obvious thought experiment at the time. I was reading a recent Morningstar report by Christine Benz on how to plan for an inflation-adjusted retirement, and she referred to what she called a landmark 1994 article by William Bengen on the subject. I gave myself a little pat on the back after reading it and seeing that it used the same methodology.

A few things jumped out:

Here are three heatmaps that highlight the withdrawal rate sweetspot.

The first one maps % of shortfalls within 40 years. If you want to be in a regime that has never had a shortfall in the first 40 years, stick to a withdrawal rate and equity percentage in the darkest green area, for instance 3.3% with 50/50 equity/bonds. 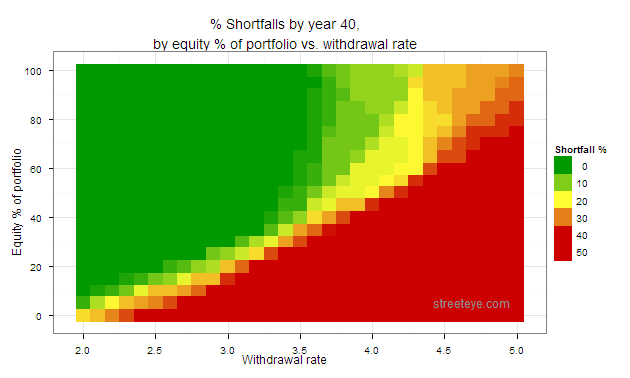 The second map shows historical years to the first shortfall. One takeaway is that when you stray outside the areas that have never seen a historical shortfall, the shortfalls don’t show up for 25-30 years if you don’t stray far. For instance, 50/50 bonds and 3.5% only led to 2 shortfalls in 44 simulations, after 35 and 38 years respectively. Shortfalls were not very probable, and happened late, so if you retire at 65, you are very unlikely to outlive your funds. 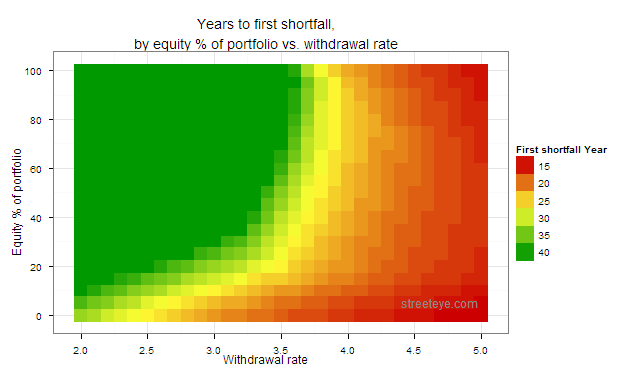 Finally, this puts the two together and uses Social Security life expectancy data to combine the probability of shortfalls with a 65-year-old male’s survival profile, to map the joint probability of ending up alive and experiencing a shortfall. 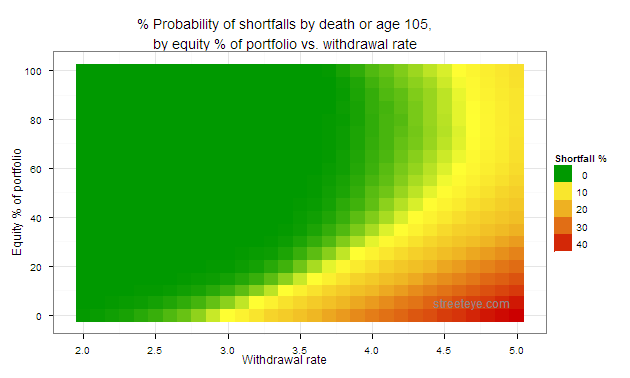 While the last map is more reassuring, the bottom line is that I don’t think the Bengen 4% rule holds up in an ironclad way, either on its own terms, or internationally and over longer time horizons than the original report. Looking at the maps or the underlying histories using withdrawal rates from 2% to 5% and equities allocations from 0 to 100% suggests 3.5%, less expenses, taxes and a margin of error, has historically been predominantly shortfall-free in the US, and more equities is better. So that might be ‘safe’ if the future is not significantly worse than the past.

Will review more literature, fine-tune the Cat Food Calculator, and possibly report back.

(See the disclaimers and note that this is not investment advice)