There’s a disingenuous meme being perpetuated by the grossly misinformed and cynical, that 50% of Americans get government benefits, but pay no taxes (the ‘lucky duckies‘, here and there and everywhere).

This is an inflammatory misrepresentation of estimates of the percentage of households that owe no Federal income tax. Let’s try to break it down.

The first point is _ everyone pays local taxes like sales and property taxes (if you pay rent, that’s where a big chunk of it goes).

Next, on their 2011 Federal tax returns, a model projects that in 2011, 46% will owe no income tax on Federal returns after paying the above. (or get a rebate _ via Donald Marron _ original paper from the Tax Policy Center)

Of those who paid no income tax:

On the first group of 50% _ the 7.65% normal FICA rate does not seem insignificant for someone living on a very modest income. Does the GOP, champion of low tax rates, really want to argue these people in the bottom quartile need a tax increase?

On the next two groups totaling 40.2%, a little history is in order. Pre-Clinton, marginal effective tax rates of around 100% and sometimes more were widespread for people trying to get off welfare. As they started earning wages, they had to pay taxes and also lost benefits like local (Federal-subsidized) income maintenance programs, food stamps etc. The structure of taxes and public assistance gave incentives for unemployment and single-parent families,  which helped trap people in poverty. Clinton enacted policies to ‘end welfare as we know it.’ Rather than create a new bureaucracy, he used the IRS, which already had a system for income reporting. The point of the child credits and Earned Income Tax Credit were, as you started to work, you got tax benefits and even a negative income tax rate to offset FICA and loss of benefits. This was a feature, not a bug, originating back in the times of Nixon and Moynihan.

While there are still notches and ‘dead zones’ in the effective tax structure, the deep-poverty trap is mostly gone. This seems like a rare instance of enlightened tax policy influenced by basic economic theory and empirical work. At the same time, using the federal income tax as a social safety net muddies the tax picture. You could just as easily say they paid X amount in tax and received an offsetting Y in benefits, which would provide a clearer picture. In that case, people could attack the benefits provided, or the progressivity of the tax code, but couldn’t say this group paid no tax. Marginal tax rates impact their behavior as much as anyone, if not more.

A simpler, broader, flatter system without the notches and dead zones would of course be far better. But that these groups pay no ‘income tax’ is simply a matter of defining it as everything over FICA, and an artifact of the way that social safety net and tax policies are conflated.

Finally, the last group of 10.8% is relatively well off. But you can pay no Federal income tax if all your income is non-taxable above the line, such as muni bond interest, or if you have sufficient itemized deductions.

It’s not necessarily hard for some people to pay little or no tax on a pretty significant income. Say you’re a small business owner. Take most of your income out of the business as dividends. Presto, 15% rate, with no FICA. (Just make sure to take enough of a salary that you can tell your auditor it’s reasonably commensurate with your duties and prevailing wages.) Next, if you’re a small business owner you can contribute 25% of income, up to $49,000, to a SEP-IRA. Next, have major itemized deductions for your mortgage, property taxes, charitable contributions. Harvest some significant capital losses. Maybe aggressive deductions for use of home office, car etc.

To some extent this low income tax bill is definitional, ie you swap corporate and personal income, to some extent policy of supporting certain activities, like municipalities and charities, to some extent opportunities for rent-seeking and avoidance. (The ability of well-connected hedge fund and private equity fund managers to defer taxes on incentive allocations and pay the 15% capital gains rate is particularly egregious.)

The tax code is progressive but not egregiously so. Pulling it all together, this chart estimates effective total federal taxes by income quintile. At the bottom end, FICA taxes are offset by credits like EITC. At the top end, corporate taxes are attributed to the quintiles that own stock. The $106,400 cap on income subject to Social Security FICA, and the 15% rate on capital gains are notable benefits for higher-income taxpayers.  As of 2006, the overall effective Federal tax rate was 20.7% of income; the bottom quintile paid 4.3%, the top quintile paid 25.8%. Update: Paul Krugman compared the share of taxes to income shares and likewise found the system only moderately progressive. 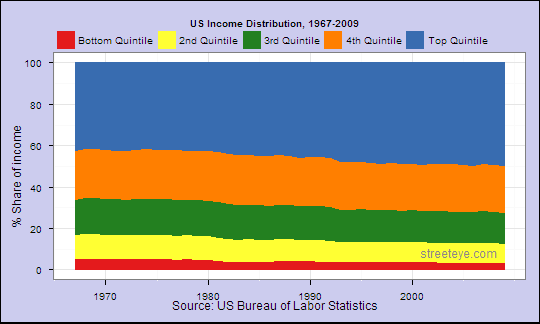 As Dylan Ratigan has ranted, it’s a ‘mathematical fact’ that restoration of a sustainable fiscal path will need both taxes and revenues. Voters agree. Obama’s position is probably somewhere to the right of the average Republican. But not the average primary voter GOP legislators have to pander to and motivate to the polls.

So some zombie lies never die, no matter how many times they are debunked, like 50% of people get benefits but pay no taxes. They create heat but shed no light, and are unhealthy red meat for uninformed partisans and an ailing democracy.

1 FICA should always be included in discussions of income taxes and rates, but is often conveniently excluded.  Social Security and Medicare have always been accounted for as as pay-as-you-go schemes paying benefits from current revenue in the general budget. Until the current recession and baby boomer retirements, FICA revenues generated massive current surpluses over Social Security and Medicare distributions, which were commingled with tax revenues in the budget and counted as closing the deficit. In 2000, Al Gore proposed to take the opportunity of projected surpluses to move FICA contributions off budget and put them into a separate proverbial ‘lockbox’, incomprehensibly to most voters, and memorably lampooned by Darrell Hammond on SNL. But the Bush Administration continued to treat contributions as general revenue, the Social Security Trust Fund as a fictional construct, and used projected smaller deficits based on Social Security surpluses to pass large tax cuts. Still, GOP talking points frequently exclude FICA paid by low-income taxpayers while bemoaning the tax burden of the wealthy.

2 The normal statutory rate is 15.3% _ half deducted from the employer’s wage and half paid by the employer. (For 2011 only, there is a 2% tax holiday for the employee portion.) As any intro micro student will tell you, the incidence of the tax depends on the relative elasticities of supply and demand. If the labor supply is perfectly inelastic and doesn’t respond to changes in wages, then labor would have to reduce wages by the whole 15.3% to keep their jobs. If labor demand is perfectly inelastic, employers have to pay the whole 15.3% to retain their employees. Reality is somewhere in the middle, plus there is some deadweight loss _ workers who would happily work and employers who would happily pay them if there were no tax, but whose jobs are not economical with the tax in place. Similarly, it seems likely that changes in corporate income taxes would impact demand for labor, and not fall totally on shareholders. The way everything is interrelated makes estimates of tax incidence by income quintile using statutory rates an incomplete picture. In general, the impact of taxes might be spread more widely beyond the direct payer or quintile affected, and will have more impact on those with fewer opportunities to modify their behavior, ie lower quintiles.

← State of Play ‘Cat Food’ In An Age of Diminished Expectations →