In this post we’ll look at how smoothing spending can improve outcomes, and how changing the equity/bond mix over time affects outcomes.

One oddity in Figure 5: even at ultra-low spending rates, you still have a measurable risk of a 25% shortfall from your starting income. At any spending rate, spending is going to vary more or less in line with the market1. So years like 1973 and 1974 might yield big spending drops, even for a 60/40 portfolio at spending rates where you are not at much risk of running out of funds in your lifetime.

If you’re already spending at a low rate, based on a safe long run return expectation, it doesn’t make sense to vary spending exactly in line with a short term change in the markets. And it’s clearly a significant disadvantage over a 4% rule to have that much variation in spending, even when there’s no shortfall.

Let’s introduce smoothing. We’ll still spend at a rate of s/life_expectancy, but instead of multiplying the rate by the latest portfolio value to get spending, we’ll multiply the rate by an exponential moving average2 of the value of previous years’ portfolios. 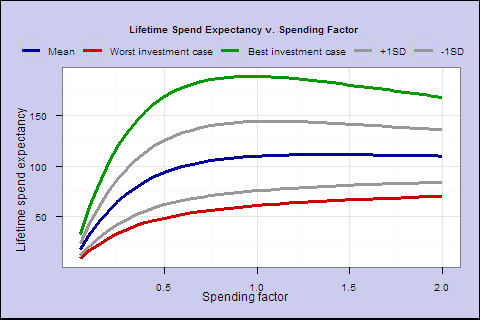 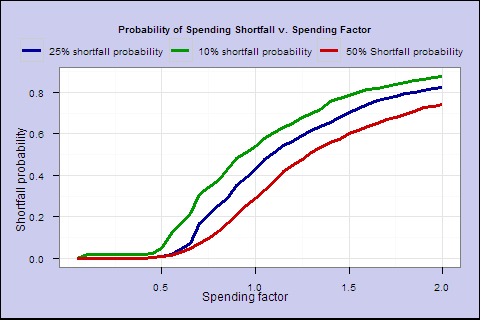 We see a notable improvement _ near 0 shortfall risk out to s of 0.5. As the next chart shows, at s of 0.5, we have slightly higher lifetime spending, smoother overall spending and a better-looking worst case. But, even though overall shortfall probability is much lower, in the worst case you can go broke, if you keep overall spending smooth in the face of a market shortfall very late in life. 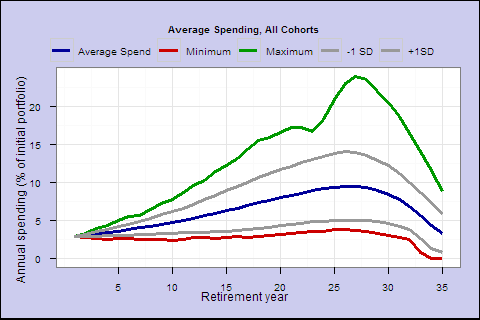 Efficient frontier3. To better visualize the tradeoff, we can combine these 2 graphs into one, which shows the best lifetime spend expectancy we can achieve for any level of shortfall risk: 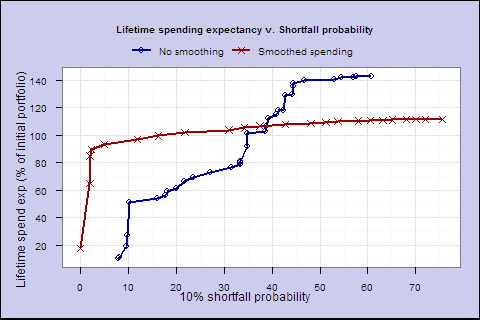 For low shortfall rates (the left side), the smoothed spending results in higher lifetime spending expectancy with lower shortfall risk. Smoothing improves the tradeoff, and represents a flexible middle ground between varying spending in line with the market, and setting a fixed spending amount at retirement like the 4% rule.

So far, we have looked only at a 60/40 portfolio. Let’s keep the smoothing multiplier at 1/3 and create efficient frontiers for a range of allocations from 0% to 100% stocks. 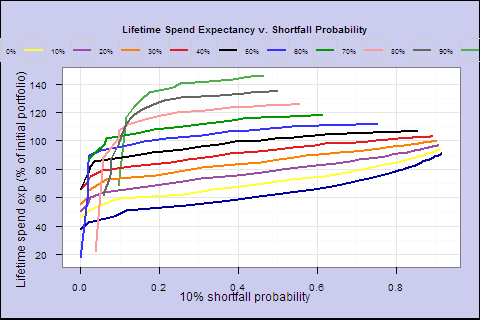 We can do this as a big panel (easier to read, esp. the legend): Figure 13. What does this tell us? For this particular smoothing multiplier 1/3, the 50/50 portfolio dominates others (the black line), giving greater lifetime spending at low shortfall probabilities.

Let’s cut to the chase and find for each spending factor, the highest spending expectancy we can achieve with zero shortfall risk, or if zero risk is not feasible, the lowest feasible risk:

That’s pretty much all we have time for this week. But before we go, let’s look at the spending profiles for 4 solutions. 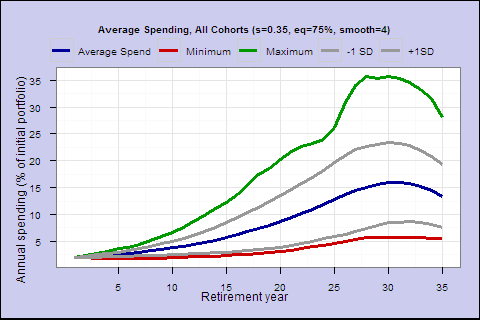 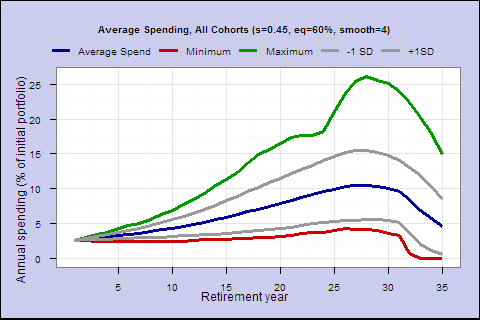 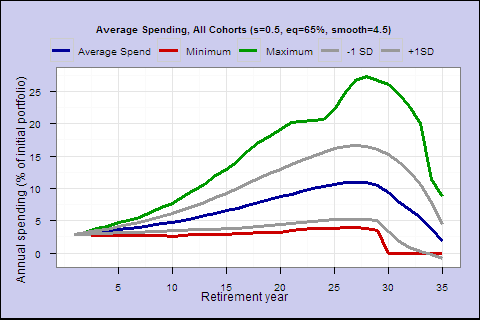 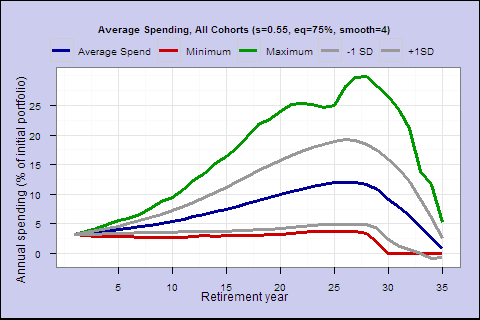 To be 100% safe, we need an initial spending rate below 4% – keeping in mind that the portfolio and spending usually rises over time at safe withdrawal rates. With this restrictive investment universe, the 4% rule is not 100% safe either, and the last chart is a less undesirable spending profile than the 4% fixed spending profile from the last post. On average, total spending is significantly higher, and the worst case is more desirable since it falls short later.

Next time, we’ll look at varying the equity percentage dynamically as you get older, other dynamic rules that might reduce late in life shortfall risk (and the undesirable hump in these curves), and we’ll talk about what the best possible optimal rule would look like.


1modulo the increase in spending rate as you age, from our s/life_expectancy rule. The s spending rate stays the same, but the denominator decreases. </p>

3This is not exactly the same as the CAPM efficient frontier. For one thing, instead of return, we plot lifetime spending in inflation-adjusted dollars. For another, instead of volatility, it’s the probability of a 25% shortfall from the starting spending. It’s a similar risk v. return plot, but can’t be interpreted quite the same way (eg adding risk-free cash to find additional feasible/optimal portfolios).