In the last part of our look at dynamic rules for spending in retirement, we discussed how changing the allocation between stocks and bonds affects the maximum sustainable spending rate. We can summarize this relationship by plotting the highest feasible initial spending rate for any acceptable shortfall level.1 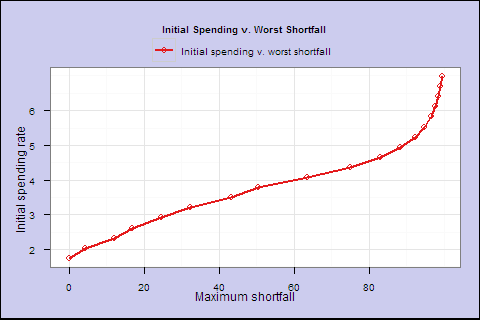 </small></center>
In part 3 today, we’re going to discuss 1) adding a parameter to change the way we increase the spending rate as we get older and 2) reducing equity allocation as we get older. Finally, we’re going to do a brute-force search for the highest initial spending and best parameters for each level of shortfall risk (skip to conclusion).

Suppose we are willing to accept the portfolio in bold and spending rate, which has never resulted in a decline greater than 24.7% below the initial spending amount. We use spending factor s=0.5, equity = 75%, smoothing factor = 2. We end up with a spending profile that looks like this: 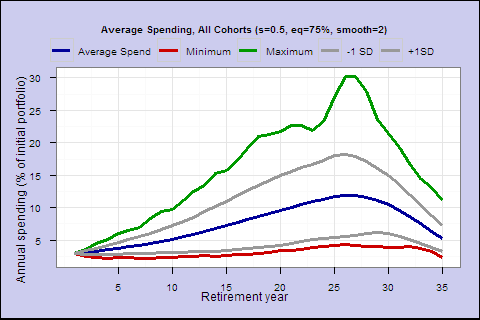 Notice the ‘hump.’ In the average case, spending rises steadily, then drops. Ideally, we would like a flatter spending profile, preferring less variability in spending. If we could take the hump and spread part of it earlier, without increasing shortfall risk, it would increase the safe spending rate.

The spending rate at age 99 is s/life_expectancy=0.5/2.19 = 22.8%. Spending rates at advanced ages are too high, decimating the portfolio and causing the decline in spending. If we reduce them, maybe we don’t need to build as big a war chest in middle years to support such a high spending rate in late years.

With a buffer of 2, we get a flatter spending profile later in life, without changing too much at the start of retirement. 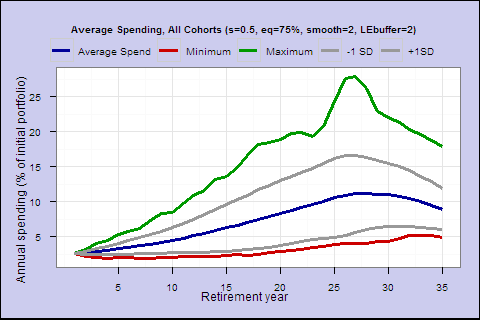 Let’s compare efficient frontiers, with and without the buffer: 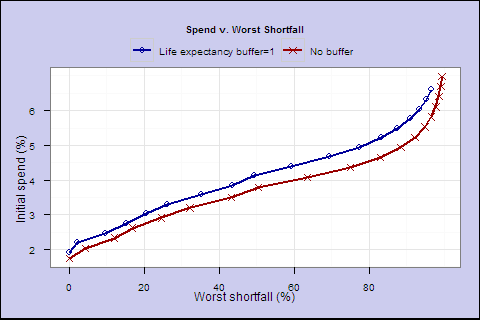 We find in all cases, the buffer gives us a higher level of initial spending for any level of shortfall risk. However, increasing the buffer does not always increase lifetime spending and sometimes worsens the tradeoff. 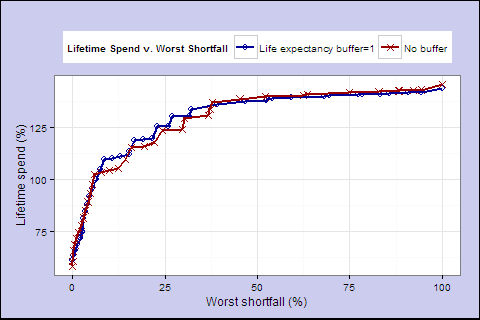 It’s a mixed picture. The buffer may in many cases allow us to spend safely at a higher initial rate, but doesn’t always improve lifetime spending. Sometimes it reduces portfolio growth and overall lifetime spending. 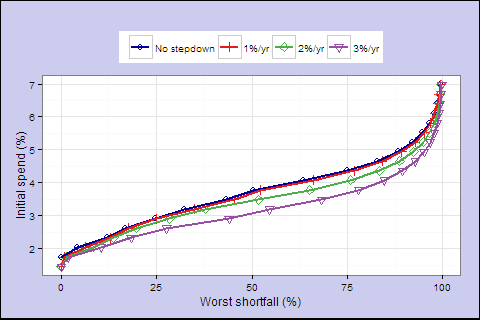 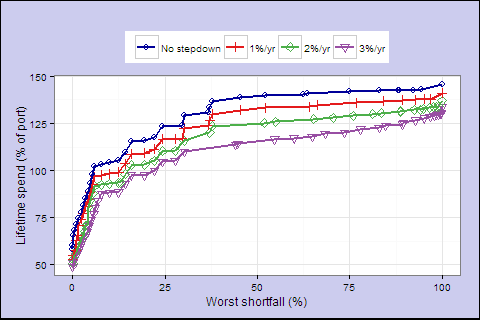 What I thought would happen: stepping down equity over time would let you start with more equity, relying on smoothing to get you over early drawdowns and strong long-run real returns to catch up. Then with lower equity in later years you wouldn’t be exposed to big drawdowns late in life.

Apparently my preconception was faulty, or this is the wrong model, stepping down too early and killing returns, or there’s a mistake somewhere (although I don’t think so). Watch this space for possible future elaboration or ninja-edit. I’ll consider this a first draft and move on.

Discarding the stepdown, we now have 4 parameters: spending factor s, starting equity, smoothing factor, and lifetime buffer. We have discussed how each one impacts the spending profile and shortfall risk. Let’s put it all together, try running a full range of reasonable values, and come up with the best efficient frontier over all values. 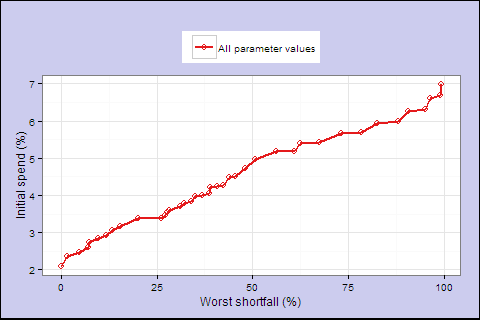 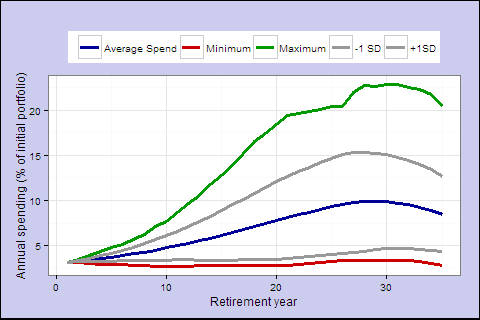 What have we learned?

These dynamic rules are chosen for analytical simplicity, to be easy to understand and calculate. There’s no reason to believe that they are the best, ie spending a constant/(life expectancy+buffer) is the ideal model to get the highest spending rate at each point in time for the lowest shortfall risk.

In the last part of this series, we’ll think about what an ideal model would look, and how to maximize spending while keeping shortfall risk at an acceptable level.


1On further review, the table in Part 2 isn’t the best way to look at it. No one thinks about the best spending factor they can achieve, they think about the initial spending %. And people don’t think about ‘lowest probability of 10% shortfall.’ Maximum acceptable shortfall is simpler and more informative.