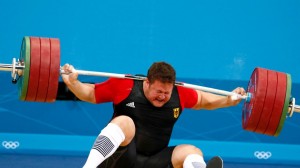 Matthias Steiner, Beijing 2008. Pain is weakness leaving the body, and/or your central nervous system telling you you’re about to die. - source unknown No matter what kind of math you use, you wind up measuring volatility with your gut. _ Ed Seykota

Good pain: You’re squatting your personal record and every fiber of your being is saying drop it, and your head is exploding and you’re making weird grunting noises and you just might vomit or soil yourself…but you keep going for that one last rep with correct form and you feel major burnout and yet you feel great, because you know that is the burn that means progress. (I hate squats.)

Bad pain: You feel a little off today and you’re just going through the motions and you jerk it, instead of that perfect form you were taught. And then something in your back tightens up, and you get that sudden feeling, uh-oh, I might not be able to tie my shoes tomorrow.

No pain no gain. What doesn’t kill you makes you stronger, as Nietzsche said, shortly before he died.

In Band of Brothers, on the DVD extras, Carwood Lipton talked about attacking the guns at Brécourt Manor with 12 soldiers under Dick Winters, vs. about 60 Germans.

That seems like bad odds to start with. (Allegedly, HQ ordered Dick Winters to take out the guns, believing he had hooked up with most of his still-scattered Easy Company).

Winters ordered Lipton to lay down covering fire, and he climbed a tree and started shooting down at the Germans in the trenches. Cleverly isolating the guns and storming them one by one, the small group took out the gun battery with minimal casualties.

But the older and wiser real-life Lipton interviewed 50 years later for the DVD said that later in the war he would never have climbed that tree, he was far too exposed and just didn’t know any better on his first day in combat.

Canadian Tommy Prince was in an Italian farmhouse as an observer to direct shelling, when a shellburst cut his phone line. He put on the Italian farmer’s clothes, went out like a farmer and inspected the chicken coop, and shook a fist at the Germans and the Allies. Then he leaned down as if to tie his shoelace, spliced the wire, and went back to directing fire on the Germans. Incredibly bold. But if you think about it, a tactic that probably reduced his risk profile vs. hunkering down incommunicado or making a run for it.

Bad risk: You keep doing that, you’re going to get killed.

Good risk: Gives you the best chance to survive and prosper over the long haul.

The only reason you get paid more than T-bills in the stock market is because you are taking risk. How do you know for sure which side of the line you’re on?

You’re not going to know the difference your first day out. It takes time to get a feel for the financial and psychological toll the market can dish out, and what you can handle.

When you start, you need a system2 that limits the risk you take to what you are comfortable with. You need to do some math, either simple or complicated, that gives you an idea of the frequency and severity of bad outcomes or periods. And then you need to build experience. You need to cultivate the little voice that tells you, something has changed, those assumptions that you built into the system aren’t right for current conditions.

Risk is ultimately subjective. You never really know all the things that could happen, or could have happened, and what the real odds are or were.

The question is, was that the best risk-reward play? And in the long run, if you keep doing that, are you going to come out OK? Even a bet with positive expected value is a losing proposition in the long run if you bet too big. (The gambler’s curse.)

Regardless of how subjective risk is, poker players know who are the fish at the table, even if the dead money flops the nuts once or twice. Scouts know some athletic phenoms are not going to have a long career because they don’t have sound fundamentals or work ethic. Time and the law of large numbers and the central limit theorem convert the highly variable in the short run to the predictable in the long run.

George Soros claims he has developed a sixth sense for when something isn’t right with his positions, and he starts to feel physical back pain when he is not comfortable with his positions and tenses up. And yet he also famously said “it takes courage to be a pig.” When you’re right on something, you want to be be positioned to extract maximum value from being right.

Risk, pain, intense effort: instinctively most of us shun them. But your ability to face them with a healthy attitude determines your personal growth and success. We need to learn to appreciate the right kind of pain and risk and distinguish it from the wrong kind.

Risk is your friend when you’re getting paid the right price to take it, you put on the right amount in the context of your entire portfolio, lifestyle, expectations, and personality; and you monitor and manage it by diversifying and cutting when necessary.

_Volatility matters when you feel it. All the charts, ratios, and advanced math in the world mean nothing when you break down, vomit or cry due to the volatility in your portfolio. I call this the vomitility threshold.. Understanding your threshold is important, for it is at this point that you lose all confidence and throw in the towel.
_ Ed Seykota</p>

Man cannot remake himself without suffering, for he is both the marble and the sculptor. _ Alexis Carrel
</em>

1 “You have never lost money in stocks over any 20-year period, but you have wiped out half your portfolio in bonds [after inflation]. So which is the riskier asset?” _ Jeremy Siegel

2 The “system” doesn’t need to be complicated. It could be as simple as a robo-adivsor portfolio or a lazy portfolio. Or it could be a full-blown active trading system with criteria for market selection, position sizing, entries, and stops/exits. But regardless, you need to keep in mind what assumptions were made in picking the system and monitor that things haven’t changed in an important way, including your own life situation and risk tolerance, and market conditions which change the risk/return profile, such as a 1999 type tech bubble or current day ZIRP interest rates.

← ‘Net neutrality’, Netflix vs. the cable monopoly, and the Internet profits tax Gold as Part of a Long-Run Asset Allocation (update) →