A couple of days ago I posted Mapping the Financial / Media Twittersphere, an illustration of the Twitter accounts that are most central for financial news.

A network centrality analysis, ie finding the people who have the most followers and the most influential followers, is a good starting point if you want to find the stories that are generating the most traction in social media and in the markets.

But there are things network centrality doesn’t pick up:

Without further ado, here’s a map of who we think are the best curators on Twitter. (It’s algorithmic, but then the choice of algorithms and inputs is subjective.) 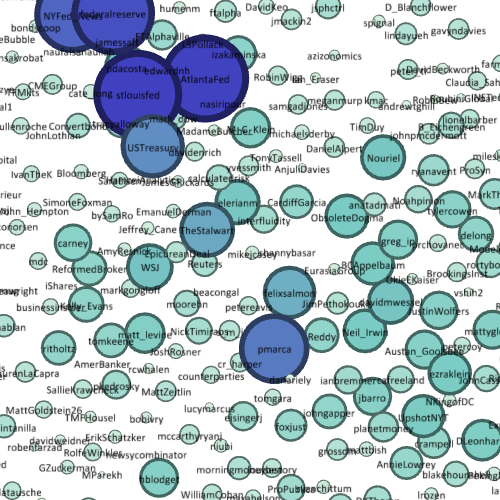 The map sorts accounts that are similar/connected. The widely/broadly followed are in the middle, you have a huge chunk of Fed/official related accounts up top, econ types are on the right, a bunch of euro/macro/FX types more toward the top, some tech on the bottom, the pure stock pickers on the left.

Below is the list of the top 100 accounts, ranked using our relevance algorithm, and then the pure centrality score. You can follow the top 50, updated on a regular basis on the StreetEYE Twitter leaderboard. For a broader list mapped and sorted just by centrality, including all those core financial media accounts, see our previous post.

Please let us know what you think!

← Mapping the Financial / Media Twittersphere Are food stamps Walmart subsidies, and should the minimum wage be $15? →