There are a thousand hacking at the branches of evil to one that is striking at the root, and it may be that he who bestows the largest amount of time and money on the needy is doing the most by his mode of life to produce that misery which he strives in vain to relieve. – Henry David Thoreau 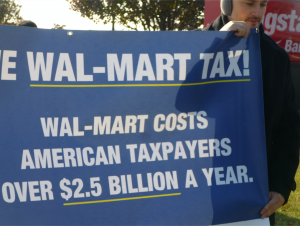 Argh! I’ve seen a lot of discussion about food stamps as a ‘subsidy’ to low-wage employers here and here, campaigns for a $15 minimum wage, and now supposedly the Democrats are going to make a $12 minimum wage a campaign issue. A lot of people who should know better are saying some very dumb things. Here’s a short reality check.

The wedge. FICA is a big tax on low-wage employers and workers. FICA is 15.3% (6.2% Social Security, 1.45% Medicare, same 7.65% employer contribution). So there’s an effective income tax of 15.3% on the minimum wage worker. Employer pays $10, $1.53 goes to the government and the worker gets $8.47. That’s a big ‘wedge’ between what the employer pays and what the employee receives. As micro-economics 101 will tell you, that tax burden fall partly on the worker and partly on the employer, and there is a deadweight loss, since there are workers who would have been happy to work for $10 who can’t work for $8.47 and keep looking, join the casual/gray economy, or drop out of the labor force.

Food stamps. If a worker gets a subsidy like food stamps, or any benefit not linked to labor, the entire subsidy accrues to the recipient, and no meaningful benefit accrues to the employer. If we’re looking at first-order effects, Walmart doesn’t get to pay a lower wage, doesn’t get more applicants, when employees get food stamps. In fact, if you take away food stamps etc., Walmart may be better off. They’ll get better employees working longer hours without worrying about losing benefits if they make too much money. You can’t call it an employer subsidy if taking it away doesn’t hurt the employer in any way. (Now, benefits do something to the overall economy that helps Walmart, they sell more to people with food stamps. But it sets my teeth on edge when people frame it as some kind of subsidy.)

EITC is a subsidy to low-wage employers. The employer pays $10/hour, instead of getting $8.47, the employee gets a tax refund that brings it up to $8.75 or more. I don’t know the details of how the EITC is calculated, but if you have no kids the maximum benefit is about $500, with kids it goes up to over $3,000. It’s not much, but it takes a bite out of the ‘wedge’, benefits both the worker and the employer, and encourages people to work. If you don’t do that, sitting at home is often no worse than a low-wage job, after FICA, loss of means-tested benefits, paying for work-related expenses, transportation, child care.

What would a $12 minimum wage do to labor supply and demand? The labor market is, well, a market. You raise the price of something, the quantity demanded decreases. You raise the minimum wage enough, there are fewer fast food joints, fewer jobs, more self-serve checkouts and hamburger-flipping robots.

1Who pays the 15.3%? Maybe workers can’t be hired for less than some take-home pay, and the employer pays the whole payroll tax. Maybe employers only hire for a certain all-in cost, cut wages to reflect their portion of the tax, and the worker pays the whole thing. But the outcome is the same, whether the employer sends the dollars to the IRS, or the employee sends the dollars to the IRS. So, even though it isn’t reflected that way in estimates of taxes paid by the bottom 20%, the effect is the same as if low wage workers wrote a check for the 15.3% to the IRS.