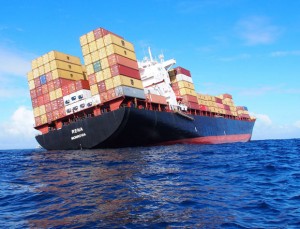 But his focus on a proximate cause omits an elephant in the room. Cycles are pervasive in nature and in economic activity. Why is that? What makes a process cyclical, and what makes the economy more or less prone to large cyclical swings?

Take chemistry, as a random field of study. If you take one solution and add another, one of three things can happen.

The same dynamics apply to any system: Disturb a stable system, or organism, population, or environment, and one of those three things will happen.

Take a pendulum. Move it a (small) distance off center. There is a force pushing it back toward the center, which is proportional to how far off center it is. The force accelerates the ball back toward the center. Accelerates means it speeds up over time, which means speed responds with a time lag to how far off center the pendulum is. When it gets back to the neutral position, it still has speed, and at neutral no force keeps it in the center, so it overshoots. Then the process starts back in the opposite direction.

The resulting position, acceleration, and velocity of the pendulum are each described by sine waves.

Now, let’s look at an industry where there is constant growth of say 10%, and producers seek to maintain 10% of annual sales as year-end inventory, so they can survive 1/10th of the year in the event of a supply interruption. In steady state growth, orders, sales and inventories rise in lockstep at 10%.

Now demand growth unexpectedly increases to 20%. Distributors initially supply the extra demand out of their inventory, and increase orders for the following year. The problem is, they are now 10% short of inventory. So they need to order enough to 1) supply customers at the higher growth rate, 2) restore the inventory they just depleted, and 3) grow inventories to support the new level of sales. So orders will go up a lot more than the ‘new normal’ 20%, more like 40%.

Now suppose production, orders, and inventory are growing steadily at 20% and suddenly go flat. At the end of the year you have ~20% too much inventory. For the following year your orders will not be flat, they will drop 20%.

The point is, the inventory cycle is like the pendulum: when there is a shock, activity is out of balance, there is a force returning to balance with a lag, and over-correction in the opposite direction.

Inventories, as we just discussed.

Consumer debt. Suppose you spend all your income, and you have consumer debt, and you maintain the principal outstanding at 50% of income. When your income goes up 10%, you spend 10% more, and you also increase your debt 10%, allowing you to spend 15% more every year. When your income suddenly goes down, you have to reduce your spending growth in line with income and reduce your debt to be line with income, leading to an even larger drop in spending.

Government spending. Can have the same dynamics as consumer spending when the government targets a debt/GDP ratio. In the case of a deficit target, like the euro zone’s stability and growth pact, when recession hits, taxes drop and spending on social services goes up. To maintain a fixed deficit/GDP target in the face of declining GDP and expanding cyclical deficit, you have to enact procyclical austerity, cutting spending in the teeth of a recession. The same logic applies to a balanced budget amendment for the USA.

Bubble dynamics in asset markets. Price rises and declines can be self-fulfilling. If you need a house and prices are going down, you’re in no rush to buy. As soon as the market starts climbing, everyone who was on the sidelines is in a rush to buy before prices rise further, and sellers are no longer in a rush to sell. That’s why, as soon as there is a sense that ‘the bottom is in,’ there is an immediate sharp turnaround. And of course, the trend feeds into consumption and the overall economy. Rising stock prices and house prices mean more people spend, buy more houses, which creates construction and more income and profits, which leads to more demand and higher prices for houses and stocks.

Conversely financial crisis dynamics mean that if one institution goes belly up, you don’t know what other institution might have just lost money in the failure and itself be endangered. Investors sell everything, and you potentially have a run on the market. The more levered and opaque the financial system is, the greater the fragility and risk of domino failures. In a Fisher debt-deflation cycle, which the Fed has been extremely keen to avoid post-2008, overly indebted consumers stop spending, which leads to deflation, which increases the real value of their debt, which leads to bankruptcies and even more of a demand decline, perpetuating the cycle.

Any other process that requires a prediction, and possibly belated over-adjustment if the prediction turns out wrong.

Anything that increases multiplier effects. When people spend more of an increase in income, multiplier effects of an income shock are greater, when they save more the fiscal multiplier is smaller. When long-term interest rates are near zero, asset prices and wealth are more sensitive to cash flows far out in the future. Kind of like growth stocks are high beta because they are valuing big earnings far in the future, and a small swing in required return or anticipated growth rate has a big impact on those future numbers.

Anything that reduces inventory and capex investment swings: Faster information diffusion about changes in demand, production, and inventories; information technology that lets firms quickly adjust forecasts and orders; just-in-time inventory systems; increasing the mix of industries in the economy that are less capital- and inventory-intensive (notably services).

The economy’s inherent stability: high demand leads to higher prices, which reduce demand; falling demand leads to lower prices, which restore demand. The faster prices and wages adjust, the faster people can move to new locales and new industries for new jobs, the lower the shock to GDP. Hence sticky prices and wages contribute to instability and recessions. This is why the ECB is always going on about structural reform.

Countercyclical monetary policy, raising interest rates as the economy approaches full employment, whether discretionary or via something like the Taylor rule.

GDP doesn’t look like a sine wave. It grows and fluctuates around trend population growth plus productivity growth. It seems to fluctuate randomly around the trend, and then occasionally something breaks bad, kicking off a sharp self-reinforcing contractionary cycle — a recession — followed by a gradual return to trend.

There are a lot of causes for recessions. Supply shock (e.g. oil crisis). Demand shock, e.g. financial crisis where a lot of perceived wealth evaporates. For instance, 2008, the tulip bubble, the South Sea bubble, the Mississippi bubble, the 1825 crisis.

A good analogy is a boat _ tip it a little to starboard and it rights itself. If you have a heavy keel it will be more stable. If you pile heavy cargo and fuel tanks high on deck, don’t secure things so they can’t shift from side to side, it capsizes when it reaches a tipping point that overcomes its limited inherent stability.

Sticky prices and wages are one reason why economic adjustments lag and take the form of business cycles and recessions. They are readily observed, and readily explained based on loss aversion. But cycles are everywhere any dynamic operates with a lag and leads to overshoot. Sticky prices are one heavy stack of containers towering above deck, but financial markets, real estate, capex boom-bust cycles, and policy can all play a role.

There is legitimate debate over whether humans are smart enough to apply discretionary fiscal and monetary policy, or if a rules-based process like a Taylor rule for monetary policy, and automatic stabilization built into fiscal policy, is more effective than a sluggish, political, and not always all-wise discretionary policy-making process.

There are strains of thought that say the economy is self-stabilizing, and all recessions are caused by government policy interference with otherwise perfect decision-makers. That’s like saying the Titanic is unsinkable. However big the boat, it obeys the same laws of physics. An experience like 2008 shows we can’t model all the things that cause instability, and we can’t assume everyone is making perfect decisions. Given a big enough hole in the hull, nothing is unsinkable, and standing around assuming it’s going to fix itself is not always the best course.

Opinions can differ over the efficacy of stabilization policy. But if your model that says recessions and business cycles shouldn’t happen, it’s not very useful for understanding them.

Successful investors like Keynes and George Soros were alert to instability. Equilibrium is like efficient markets _ a useful assumption for a simple model, that works great in theory but not always in practice.