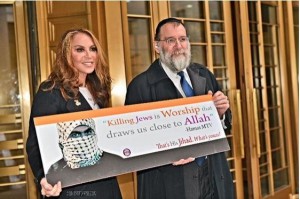 There will always be those who mean to do us harm. To stop them, we risk awakening the same evil within ourselves. — James T. Kirk_ Pamela Geller is a troll. Hatemonger. Lunatic. Check out some of her quotes.

Two violent extremists attacked her ‘Draw Mohammed’ contest and were killed. Some are casting her as a free speech heroine a la Charlie Hebdo.

I’m not so sure about that.

Charlie Hebdo is a political satire version of Cracked/Mad Magazine with an anti-establishment, anti-PC political view, taking glee at being gratuitously offensive. Sometimes it’s on point, sometimes sophomoric. But not racist or even specifically anti-Islamic, pretty much equal-opportunity blasphemers. I think if PEN can honor Pussy Riot, they can honor a French bizarro The Onion. But if some disagree and don’t think it’s cool or funny, or that these shenanigans should be encouraged even in the face of the chilling effect of an AK-47, hey, that’s their right too.

I’m not so sure Pamela Geller’s defenders are on point. Let’s rank a few random free-speech heroes.

I think there is a distinction between people who use license to make an artistic point, someone who pushes the envelope or violates decency norms to make a buck, and someone who trolls people to spew hatred and provoke division for political (and financial) gain.

They aren’t all deserving of the same amount of protection.

The Constitution requires that the law not prevent these people from speaking.

It doesn’t require anyone to defend her or put themselves at risk to help spread her hatred.

It’s a free country, you’re free to go onto the A train and start calling people the N-word. But don’t expect much sympathy from me if you get your rear end kicked.

And I’m certainly not risking my rear end to rescue yours.

A cop got shot at Geller’s event. If he had died, would you be telling the cop’s kids it was worth it to protect Pamela Geller’s right to speak? If I were the kids, sure I would think my dad was a hero, but I would sure wish he could have stayed home that day.

The state has to make a decision about how many resources to spend protecting people’s free speech.

We have troops risking their lives to defend Muslims in Muslim countries, and Muslim allies, and patriotic Muslim Americans trying to do their jobs, and Pamela Geller puts them at risk, or in any event she doesn’t make any of their jobs any easier.

There are a lot of things you have the right to do under the Constitution that aren’t the right thing to do.

Freedom assumes people are basically decent and are going to try to get along. If they don’t act that way, the country goes down the crapper.

We can’t allow either violent Muslim extremists, or hate-mongers like Pamela Geller to set our agenda.

If you have one crazy opportunist and no one supports her, you can say, it’s the price of having a free country to let crazy people speak. If a lot of people start defending her as some kind of heroine it’s just a disaster for this country.

I don’t think we are well served turning her into a free speech heroine. There are a lot of others more deserving of protection.

I’m OK with her getting basically the minimum amount of protection consistent with the First Amendment. Let her pay for her own security.

_If you hate a person, you hate something in him that is part of yourself. What isn’t part of ourselves doesn’t disturb us. — Hermann Hesse
_

← Are food stamps Walmart subsidies, and should the minimum wage be $15? Why does everyone hate libertarians? →