Arbitrary power is most easily established on the ruins of liberty abused to licentiousness. - George Washington.

To suppose that any form of government will secure liberty or happiness without any virtue in the people, is a chimerical idea. - James Madison 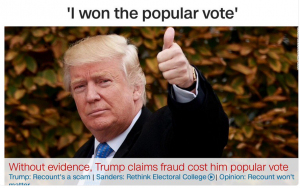 It seems richly ironic that the utopian, nominally libertarian visionaries of Silicon Valley, the folks of the Whole Earth Catalog and Think Different, in creating a many-to-many Internet platform where everyone can communicate with everyone via social media, have provided the tools for mass manipulation, mass surveillance, and mob rule on a mass scale.

Social media is turning into a cesspool of tar-and-pitchfork mobs, hate, false but truthy viral memes, spam, and lame celebrity and corporate shilling.

Surely we can agree that it would be a bad thing for democracy if a demagogue, through effective control of mass media, were to persuade people he won an election when he didn’t, and that people who say otherwise are unreliable and that only he can solve the country’s problems, etc., etc.?

Is that actually happening? Seems a question of degree. If you post that Clinton won the popular vote, some moron will come back to say she didn’t really because of illegals, or uncounted absentee ballots, or some other crazy argument that boils down to, “we won all the votes if you don’t count the people who voted for her, who shouldn’t count anyway.”

Which sounds like a great excuse for further disenfranchisement, convenient purges of the voter rolls, voter ID laws. “Always accuse your adversary of whatever it is you yourself are attempting.”

Which sounds like an un-American disrespect for our democracy, and an excuse for further cynicism, and decay.

Then, if people want to take common sense steps to prevent the spread of lies, people cry media manipulation.

If someone wants to be a troll and write that Trump won the popular vote, I certainly don’t advocate censoring them or sending them to jail. If someone wants to pay Facebook to run an ad pointing to a site writing similar nonsense, that’s also fine, as long as it’s obvious it’s an ad and Facebook is not presenting it as journalism.

However, once a lot of people start sharing that nonsense as news and Facebook presents it as news, that’s a real problem. Facebook is presenting false and misleading fiction as news adhering to journalism school norms.

At that point Facebook is misleading people. Facebook should let people flag it as false. Their tools to do that are shite, protestations notwithstanding. And if something is consistently flagged as false, and someone is sharing it as news, Facebook should show a disclaimer, ‘the accuracy of this item/site has been disputed, do you want to learn more before you share?’ with stats on who and how many people are flagging it, and the links to evidence they cite. A little nudge goes a long way with most decent people. And if people still want to share it, then fine. I’m not advocating Chinese style memory-holing Tienanmen Square here. Just don’t present conspiracy theories, wingnut fiction, and blatantly manipulative propaganda in context as real news.

Commingling false propaganda with news diminishes the credibility of all news media, it reduces the value of Facebook’s platform, and it’s malware infecting the operating system of democracy.

If you want to believe nonsense, like that Trump won the popular vote or that the moon landing was faked and it’s made of green cheese, it’s your own problem. But if everyone believes nonsense, it’s a sick society. Mark Zuckerberg and Facebook need to decide if the ad money, engagement, and sidestepping criticism are worth poisoning the well.

There is no valid argument against a minimal news filter for fraud and manipulation. Is it OK that people searching for election results get as a the top result a fake page showing Trump won the popular vote, and Google should just let it slide? We take it for granted that Google should care about search quality.

It’s impossible to avoid applying a minimal filter to avoid spam, illegal or offensive content. Surely blatantly false and misleading content shouldn’t be given a pass, while napalm children are blocked.

Facebook already optimizes for engagement, they need to tune it a bit for anti-spam.

The objections boil down to, the only truth that matters is, if Facebook were to stop presenting nonsense under the rubric of news, it would hurt one party more than another. Truth is what serves the party line and the Great Leader.

The good-faith argument that we should err on the side of freedom of speech is a good instinct. But you can’t allow lies to drown out truth, and dark, extreme forces and foreign actors to manipulate narratives so easily.

A problem I have with libertarian arguments in general is that they take free markets as given, when in fact they are extraordinarily complex institutions which depend on norms and laws enforced by government.

Before you can have a free market, you need a market design that works. And this applies to the marketplace for ideas as well as the free market for goods and services. (And it’s a key function of a news aggregator like StreetEYE.)

Otherwise, the libertarian argument boils down to, “I’ve got the money, I’ve got the power, I know how to game the system, eff you and your superior attitude and your ‘fairness’ and your market design, I’m going to impose the market design that benefits me.”

When really the libertarian argument should be, how do we create a market design with a minimum of rules and arbitrary government intervention that achieves the objectives of the market, where government can’t abuse its power, and where bad-faith actors and big market players can’t abuse their power.

Which is extremely hard. And takes a complex understanding of government, markets, and the true meaning of liberty as maximum freedom for responsible actors. And willingness to do the hard work of constantly improving markets and rules, instead of throwing up hands and obstructing the people willing to do the work.

And if taken too far, the attitude that laws are always the problem, not the solution, becomes a disease that makes the republic go down the drain, instead of the cure.

Decent people should realize that a society where any lie can be the truth, isn’t a society that can lead the world, or one worth having.

← Everyone lives in a bubble, and all models are overfitted Buyer’s markets, seller’s markets and the hedge fund hype cycle →