A word about methodology:

3) From these 5 people you can get a pretty great starting list:

4) That would be a great place to start, but we can do a little better:

1) First expanding it, by finding who these users follow

In the past I’ve generated a graph of the users, and this year I really went ham on it and created this magnificent beast: 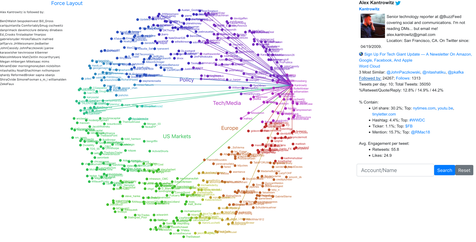 If you click here you can explore the graph interactively:

I hope this helps everyone find great new FinTwit BFFs to follow.

It’s always a bit arbitrary, where to cut off people who aren’t relevant. Some people may find the influential tech or political accounts a bore, but I try to find a balance.

The biggest problem is churn. There are some people who are highly followed who don’t really post relevant stuff any more. There are people who are pretty relevant but it takes a very long time to break through and get influential. I could expand the panel, but the more you expand it the more the common denominator is… all Trump all the time.

Then, I guess I could use topic analysis to try to downvote Trump and politics… use noise cancellation to determine what is popular out in the broad population and penalize it … but it’s turtles all the way down the rabbit hole.

That’s it! If you’re looking for top blogs for your daily list or Feedly reader check out the July listicle of the most shared financial blogs.