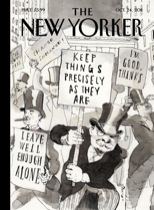 Never doubt that a small group of thoughtful, committed citizens can change the world; indeed it’s the only thing that ever has. - Margaret Mead Given a choice between order and chaos, I will generally choose order.

Nevertheless, if I was 24, I would almost certainly be protesting and organizing Occupy Wall Street.

For one thing, I would be digitally skilled and underemployed _ the employment-population ratio for 16-24 year olds is the lowest on record. Isn’t that special you all got bailed out? And I got stuck unemployed, with unforgivable student loans?

For the other reasons why, let’s review a short history of the last few years:

How stupid do you people think we are? You tossers had one job to do: create a financial system that didn’t collapse like a house of cards, and channeled resources from savers to investment projects. For which you received the biggest chunk of corporate profits, plus massive bonus comp!

And then you had the friggin’ nerve to blame government, as if modest but misguided and ill-timed efforts to broaden lending could surely only have had the effect of causing the ignominious collapse of the otherwise entirely prudent and sound banking system.

Here we are, three years later. Too big to fail has gotten bigger. The Fed keeps shoveling free money at the banks, while they fight tooth and nail against the things that will prevent future calamities: higher bank equity / less leverage; transparency; and reduction in moral hazard (translation: s*** that makes them money now, while risking big losses for clients, taxpayers or shareholders later). They say regs will reduce lending and cut job creation _ the lending that they are not doing and the jobs they are not creating.

More to the point, the financial system was exposed as broken, and no one seems to be trying to fix it. We had an election, we gave Obama the White House, the House, and the Senate. Three years later, we still have Geithner and Bernanke. If Wall Street has captured all the elected officials and candidates, what are you supposed to do but take to the streets?

I don’t blame Obama for keeping Geithner and Summers and Bernanke initially, to avoid rocking the boat in a storm. I think they’re smart guys and they understand the problem. Because they created the problem.

These guys were at the center of the efforts to give bankers free rein to create a shadow financial system beyond regulatory control. The bankers hacked the system to leverage beyond reason, and create heads-we-win, tails-you-lose products, and divert the money to themselves. In the process they utterly broke the financial system.

At some point, you need a new broom to sweep clean. Instead, Obama is tacking to the center, while the GOP moves somewhere to the right of Attila the Hun.

Markets are good. Freedom is good. But the financial system is an artificial construct. It needs to be architected in a way that it serves the real economy, doesn’t just leech off of it.

Like free markets, nature is beautiful and efficient, but that doesn’t mean I’m not going to build a house for shelter from storms, or that I’m going to let myself be devoured by a pack of wolves.

Monstrosities like robo-signing, Wall Street capture of government should stop. But apparently we have a dilemma _ you can have rule of law, or a working financial system, but not both. If you stopped shoveling money at banks, made them adhere to the law and disclose their true financial condition, most of them would be padlocked tomorrow.

So there’s a charade of reform. But without transparency, rule of law, proper record-keeping, without a basic sense of fairness, bankers as well as borrowers accepting consequences of their actions, you can’t have a healthy democracy and capitalist system.

When bad actors get bailed out, continue to get fat bonuses, and no one is held accountable, while other people lose their homes and still can’t get out from under mortgages or student loans, it’s a recipe for unhappiness and poor economic performance.

The US has turned into a third-world country, with extreme inequality, and a government captured by an upper class that cares only about looting as much as possible, and après moi le déluge.

But hope endures, and change is still possible.