In part 1 and part 2, we developed a framework for evaluating and identifying a good plan for retirement spending and asset allocation.

So, where we left off, we had independently solved the spending schedule and then the equity allocation schedule. Of course, that does not mean that when you put those two solutions together, they are the best we can do. It just means the equity allocation is the best available given that spending schedule. So today, we’ll try to solve them simultaneously.

The framework in which we try to solve the retirement spending problem is:

And we find CE spending as:

That gives us a value: the CE spending a random retiree at any year 1926-1987, with the given life table, and given risk aversion, could have expected from that 2×25 spending/allocation schedule.

Now, the problem is to maximize that value: find the 2×25 spending/allocation schedule that maximizes the CE spending function.

So we fire up our optimizer, using this function, gamma=4, and the starting solution we previously found solving the two schedules independently. We try a few different optimization methods. Some of them fail, but the Powell method comes up with a pretty good solution after about six hours on our PC. We use that as our starting solution and run the optimization again using several different methods, and with a very slight improvement it holds up as the best we can find.

We see that our initial spending is higher (6.1% vs. 5.9% when we optimized spending and equity independently). We see that in our median case, spending is flatter. We see that the worst-case outcome is a bit worse. Nevertheless it seems credible that the tradeoff is preferable for a moderately risk averse retiree. 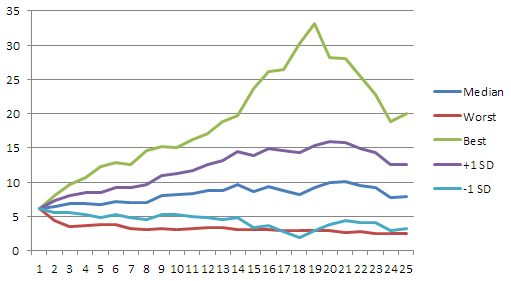 It’s quite interesting that the equity % starts at 63.8% and rises throughout retirement. Conventional wisdom, as implemented in many target date funds would be to reduce the equity allocation as you get older, since you have less time to recover any shortfall from a major market decline. So that result bears investigation to see if there is an error, or if it’s inherent in the unconventional aspects of this approach.

Otherwise, this seems like an analytically sound approach that yields a good practical result.