Volatility is a proxy for how risky Mr. Market thinks an asset is. This is a foundational question about risk, but I’m not sure it gets taught very often explicitly, it kind of gets lost in the math as just another simplifying assumption.

One post in particular that motivated this is Howard Marks’s recent letter. Howard Marks inhabits the same circle of the investing pantheon as Warren Buffett. He has a stellar long-term record and writes very lucidly about complex concepts. If you want to be a fully-fledged member of the fellowship of educated investors, but haven’t read his collection “The Most Important Thing” and made his letters a regular read, start now!

While volatility is quantifiable and machinable_and can also be an indicator or symptom of riskiness and even a specific form of risk_I think it falls far short as “the” definition of investment risk.

I think he could have been a little more specific if he had wanted, and said volatility is a good proxy for how risky the market thinks an investment is, not how risky it really is1.

One of your partners, named Mr. Market, is very obliging indeed. Every day he tells you what he thinks your interest is worth and furthermore offers either to buy you out or to sell you an additional interest on that basis. Sometimes his idea of value appears plausible and justified by business developments and prospects as you know them. Often, on the other hand, Mr. Market lets his enthusiasm or his fears run away with him, and the value he proposes seems to you a little short of silly.

We don’t know with certainty the future cash flows we will harvest from a security. But people who own or might own a security have some idea of the range of potential outcomes. Otherwise they wouldn’t invest.

On a good day, Mr. Market values a security according to the best-case scenario: at the high end of the range of potential valuations. On a bad day he values it according to the worst-case scenario, at the low end of the range. On a typical day he moves a typical distance between the two extremes of fear and greed. ‘Volatility’ is how much a stock moves on a typical day based on Mr. Market’s mood. This amount is a proxy for how wide Mr. Market’s valuation range is, hence how risky the market thinks the security is. If the range is narrow, a typical day’s mood swing, from random news flow and shifts in buy v. sell volume and sentiment, won’t generate a big move in price. If Mr. Market’s valuation range is wide, the daily price swings will be wider2.

This is beautifully illustrated in Marks’s chart, which every investor would do well to think about and mentally internalize: 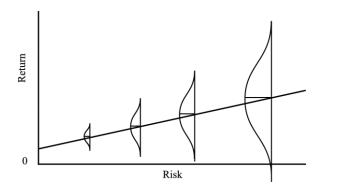 As you choose investments and portfolios that are more risky, the mean of the expected return distribution goes up, but the distribution of potential outcomes widens.

Suppose there is news out on the stock, and it drops 50%. A big drop makes its measured historical volatility, the standard deviation of daily returns, spike higher. This generally means a combination of two things. 1) As The Dude would say, “New shit has come to light.” The distribution of potential outcomes has changed. And 2), Mr. Market is reacting with his usual fickleness, and obliging you with an offer to buy or sell at some point in the distribution.

So, has the distribution of potential outcomes worsened and/or become more uncertain? Or is it little changed, and Mr. Market is just having a bad day and offering a price at the low end of the distribution?

If it’s the latter, then paradoxically, ‘quantifiable and machinable’ risk just soared, when actual downside risk of permanent loss plummeted.

And that’s the job of the stockpicker in a nutshell, to recognize when Mr. Market is panicked or depressed, and offering a price at the low end of true potential outcomes, and act dispassionately and decisively in the face of temperamental Mr. Market.

1 A subtle, but key point is that the volatility is a proxy for how risky the stock is as part of a diversified portfolio. For instance, a highly diversified but highly leveraged company may be very sensitive to economic conditions. A speculative company may be very sensitive to the risk of, for instance the outcome of a mining or pharmaceutical project. However, that risk is less correlated to the market and hence more diversifiable. So if they exhibit similar market volatility, the range of actually potential economic outcomes for the latter may be higher. But the latter would contribute a similar risk to a diversified portfolio, because even though it would have a higher range of outcomes, it would be more likely to be up when the rest of the market was down, and vice versa, dampening its effect on the risk of the whole portfolio.

2 Another way of visualizing Mr. Market is, on a good day, the most optimistic buyer is setting the price at the margin, on a bad day the most pessimistic seller or most forced liquidator is setting the price. If one stock is more volatile than another, maybe that means each individual market participant has a higher degree of uncertainty about its valuation. Or maybe that means there’s a wide dispersion of views among market participants. Either way, a typical daily swing in sentiment, and variations in buy/sell flow, will need to generate larger swings in prices to clear the market.