In this post we’re going to look at a simple way to visualize the power of diversification, and what correlation really tells us.

Suppose you have 2 investments, A and B.

How risky is the combined portfolio? It depends on how risky the individual securities are, and on the correlation of the two stocks’ returns.

Suppose the volatilities of A and B are

What does correlation ρ = 0 mean?

In this example, since ρ is 0, we don’t expect B to deviate from its mean in any systematic way.

So, how risky is the combined portfolio? The formula for the volatility of the portfolio is1:

In this example, ρ is 0, so the correlation term goes away, and you are left with:

Which looks kind of like the Pythagorean theorem, right?

And the general formula including the correlation term looks like the law of cosines, which is the generalization of the Pythagorean theorem to non-right angles:

Where γ is the angle between the 2 sides.

So, to represent 2 securities with ρ correlation, we can draw a triangle where 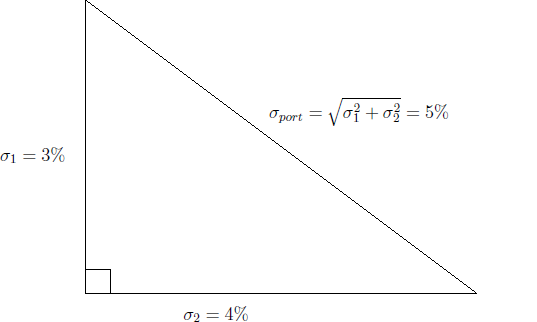 If you think visually, then these pictures can give you better intuition about what adding imperfectly correlated assets can do to your risk/reward.

“All nature is but art, unknown to thee;
All chance, direction, which thou canst not see;
All discord, harmony not understood;
All partial evil, universal good.” — Alexander Pope

Adendum _ more intuitions and speculations about correlation and risk.

1 To simplify the formulas a little, this is using 1 share of each and dollar volatility.

The more commonly cited formula relating portfolio volatility as a percentage of assets to percentage volatility and weights of underlying assets is:

which we simplified by setting σA = wAσA and σB = wBσB

← Risk: Why is volatility used to measure risk? A Piketty counterargument: Is r > g a reasonable assumption? →